I ain't PW, but I am learning how to make pies and breads before my family comes for Thanksgiving.  Unfortunately, I am a much better comsumer than a baker. 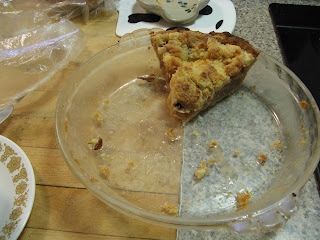 This recipe is from my 94 year old friend.

She has 280 years worth of recipes from her mother, grandmother and great aunt.  This is just a small selection of her many old recipe boxes. 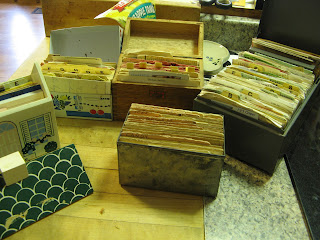 Heritage Dutch Apple Pie, with Struddle /Strussel Topping is the Pie of the Day here.

Head baker is Dorothy.  She was a farm wife and had a very large family she had to feed for 70 years as they ran their beloved dairy farm in the most rural part of Vermont.     She is an incredible cook.

First thing she said about this recipe was: "Macintosh apples shrink too much, Cortland apples stay in better shape when baking."
I went and got fresh, local Cortlands, peeled 6 medium sized, took the core out, sliced them up and got about 6 cups worth of apple slices, ready to go.

Dorothy has a hard time standing up so we used a unbaked pie crust shell-with fluted edges- so she didn't have to try and balance while rolling out crust. 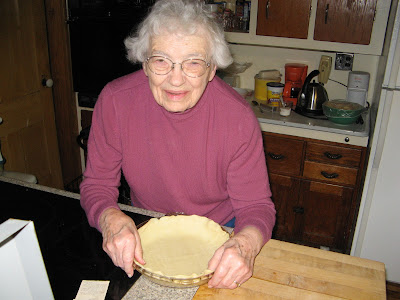 Pile the 6 cups of sliced apple onto the pie shell. 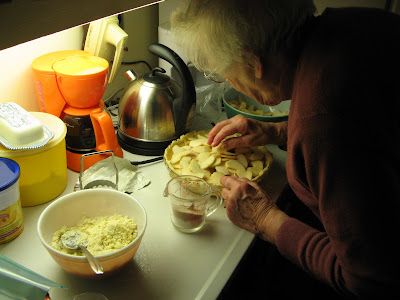 Combine 1/2 cup sugar, 1/2 Tsp cinnamon and 1/2 Tsp ground nutmeg in a bowl or measuring cup. Mix well.
As you arrange the apple slices in the pie shell, layer the cinnamon, nutmeg and sugar mixture. 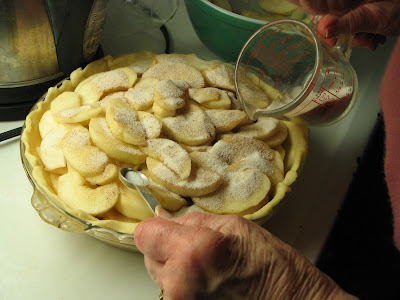 In a separate bowl combine:
1 cup sifted flour
3/4 cup sugar
Cut in 1/2 Cup soft butter with pastry blender or 2 knives until crumbly.
Sprinkle these crumbs over the apples: 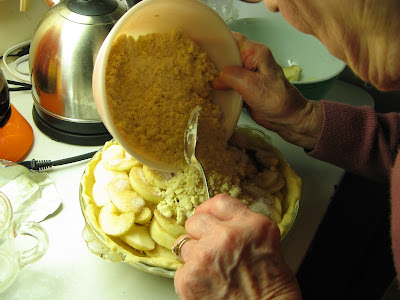 Pile the crumbly mix on top of the apples and pack the mixture on tight as possible. 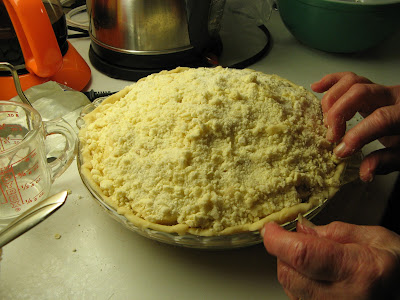 Bake in 400 degree oven 50 minutes OR until the top is golden brown and apples are tender (stab them with a long fork).
The other option is to bake at 400 degrees for 20 minutes and then at 350 degrees for 30 minutes. 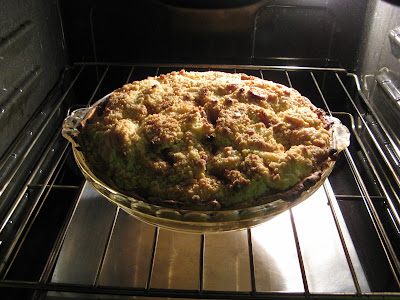 Serve this pie with one or two of the following:
Slice of Vermont Cheddar Cheese
Ice cream
Whipped cream
Maple syrup

This pie did not last 30 minutes after it cooled off.  We ate all of it.  With all of the above combinations.      Fabulous.
We are going to make another one very very soon.  Maybe 2 or 3 at the same time.
Posted by ~ Janis