The Cat Who Would Not Leave 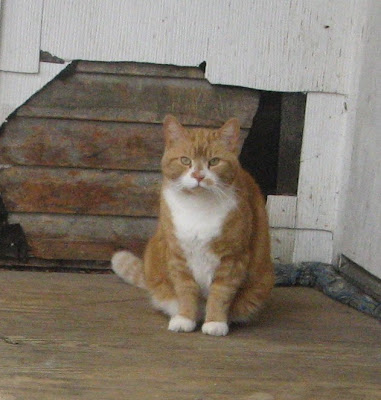 Someone obviously dumped him, and another cat, out here in the middle of nowhere. Both cats found their way to this farm over a year ago.  Upon their discovery we immediately started feeding them outside. They lived in the many connecting barns and we left other treats for them to snack on until I was sure I could capture them and get them directly to the local vet.  Both cats were skinny, dirty and looked typically feral, so I needed to be guaranteed that they would be free of feline aids and other diseases before incorporating them into the household with an older, disabled, inside cat. And do it before harsh winter weather set in.  With 2 traps set up, it took a week to trap the orange boy and somehow in that same time period the black cat dissapeared and was never seen again.  Surprisingly, the vet discovered the orange boy was already neutered and declawed.   His blood tests came back negative, so he was vaccinated and wormed.  I brought him back to the farm and brought him directly into the large old farm house to start his new life. He had the good fortune to already have sniffed the resident dog and cat thru the thick screens on the front doors all summer, so I hoped all would go well.      And it has. 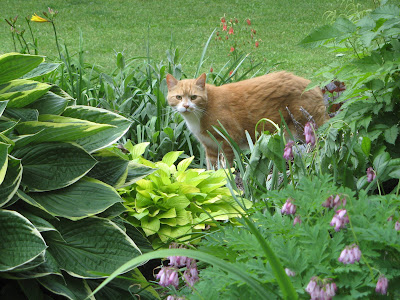 It took a few weeks for the Orange Prince to find all the rooms and secret hidding places in this ancient old farmhouse and he was initially a bit uneasy with the quick movements of the farm dog.  He has his own idioscycracies: such as refusing to use any litterbox at any time, no matter how desperate he may be.  He insisits on going outside at 5 am each and every day and returning several times per day to eat and then go immediately back outside.
I found myself being a doorman to his constant in and out needs.  If it was raining he would refuse to go out the front door, wanting to exit by the back door that goes directly into the barn instead.  A very smart cat.  When he would return in the evening he would eat and then go immediately upstairs to the most comfortable bed in the house and curl up to nap until 4:59am the next morning.    His personal grooming was non existant, yet he would not let me close enough to brush him.   From any window in this house, he could be seen prowling the several hundred acres here morning, noon and just before dusk. Ranging far and wide. He stuck out like a fireball, and I prayed the local coyotes and foxes would not notice.
A year later, after 3 trips to the vet to get him updated on vaccines and worming, he has improved his personal grooming habits, gained 2 pounds, jumps in my lap when I am on the computer and snuggles up with me for his night time sleep.   Getting him adjusted to daylight savings time has been an ongoing struggle.    "Murphy" as he is now called, is independant, entertaining and one of the 2 dominant personlaities in this household.  He obviously has decided to stay. 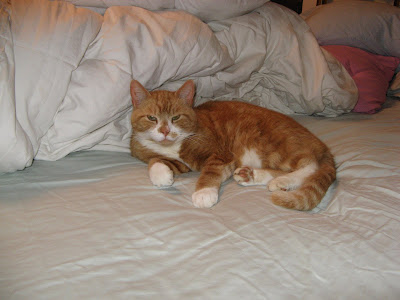 The Breeze of Change

The incredible mild weather has allowed more walking and exploring some hard to reach places.
The warmer temperatures has also allowed more folks to come look at the cows. Unfortunately both groups that have come to shop the herd, have been dairy farmers who both had sold out ALL their dairy cows within the past 3 days.  The goverment subsidized dairy buyout program is a complicated, and sad project.
Today my hardest working cow, Wilma, left for her new home. The new owner has lots of hay and feed for the winter.  We do not. And it is critical that my cows find new homes before the really bad weather kicks in.
Wilma gave birth to a set of beautiful twin heifer calves in April. There were a lot of trials and tribulations along the way and we survived them.  She was gentle, calm, smart and easy to deal with. May you become the Queen of your new barnyard. 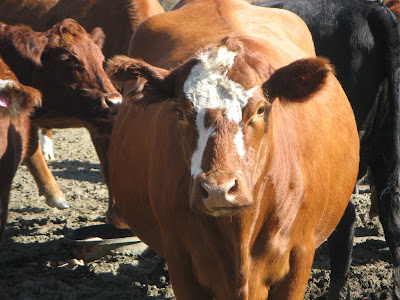 This week has been full of wonderful Indian Summer weather. Temperatures in the low 50s, sun & gentle breezes have been a welcomed surprise and an invitation to explore.      I found a wonderful trail I had not seen before and followed it to a small stream. 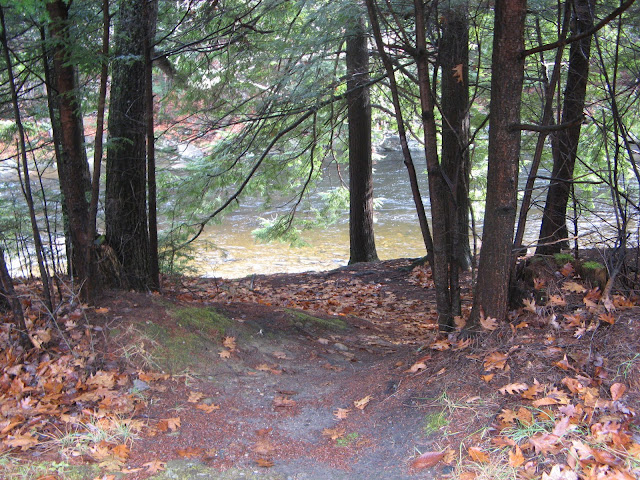 I saw small trout darting amonst the rocks and have decided to come here in April when fishing starts. The area is well hidden and there are not any signs of humans coming to this location. Lots of wildlife came and went in the time I was there. Always a good sign. 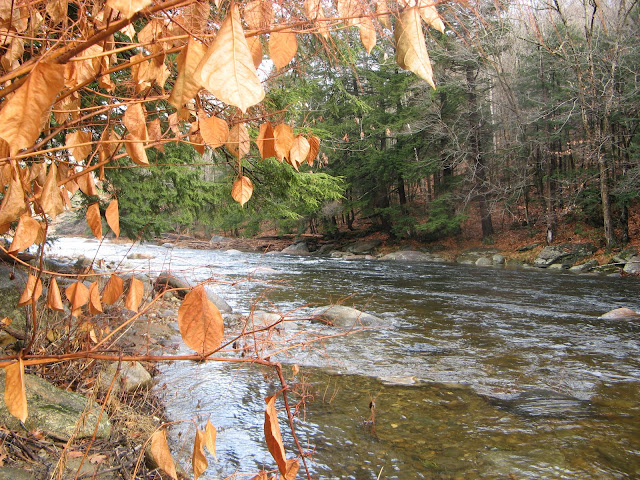 While the remnants of Hurricane Ida make the weekend miserable with rain and very cold temps outside, my Christmas cactus blooms in its glory, inside. 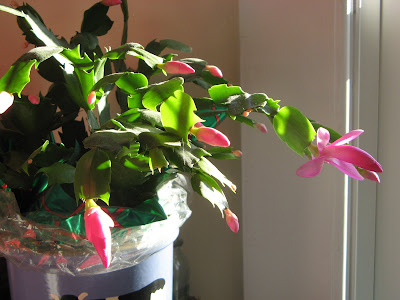 Today is the first day of hunting season and many deer and uncountable hunters are getting very wet and cold.  The rest of us are enjoying the wood stove, hot soup and relaxation that comes with a long rainy weekend day. 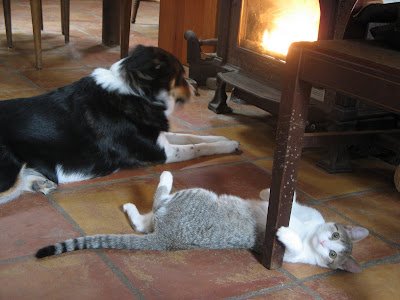 Fall is in full swing with leaves making their presence known in so many different ways.   The sunlight here is different now and in short supply.  The light, the leaves and the dead trees make every thing look like a unique canvas of art. 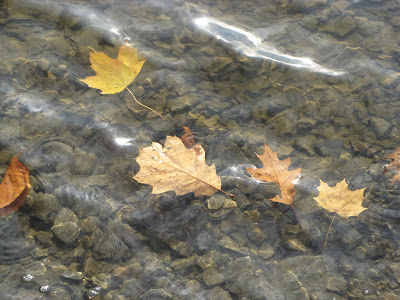 Dead trees take on an entirely different form in the fall and winter. 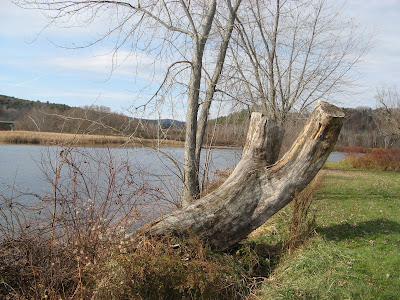 First Snow for The Baby 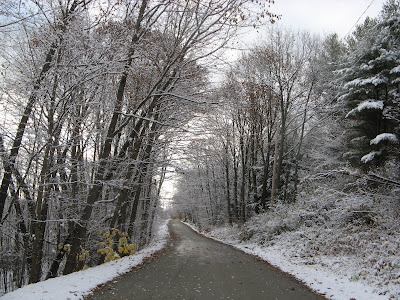 We got our first snow already. It blanketed the fields and roads with a cold carpet of white. 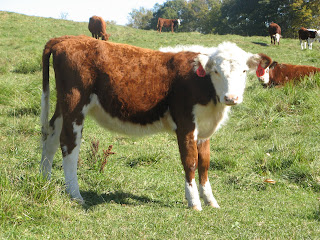