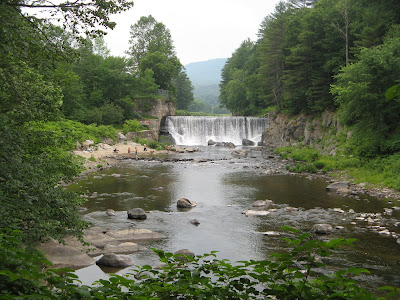 This is a very sweet place when the heat index is 95 and above.
Very isolated and only a few locals really know how to find it.   Today a few hay crews took advantage of it after loading hay all day.  Tomorrow is suppose to be even hotter.
Posted by ~ Janis No comments: Links to this post

Power Grazing before the Storm 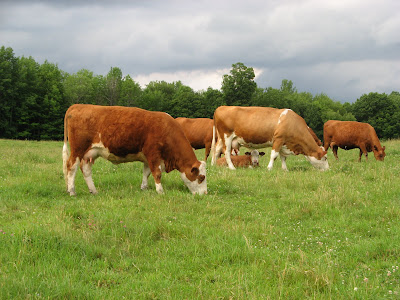 Just when I had my entire summer planned I got accepted into a very intense training program.
In June, in Alabama, where the heat index is never below 95 degrees.

The State Veterinarian asked me to go in his place.   It is obvious to me now that he had NO idea what he was getting me into. 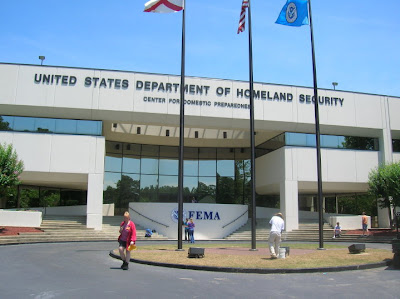 For 5 days I set my alarm for 4 am, went to breckfast and rode a bus to my very intense disaster classes.
The end of the day was around 9 pm.

This training was about agricultural terrorism and weapons of mass destruction. 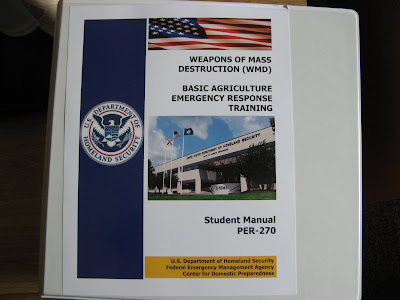 Apparently there is some thought that the next act of terrorism will strike at our food system and this training brings together veterinarians, law enforcement, animal responders and others who are involved in rural areas where a large portion of our food comes from.  The training teaches us how to respond to an incident.
How to chose the correct kind of Personal Protection Equipment ( PPE ) and how to use very intricate survey and monitoring machines and equipment to detect for Chemical, Biological, Radiological, Nuclear and Explosive materials that may be found on a farm, feed lot, greenhouse, field or any other agricultural area after a terrorist incident. 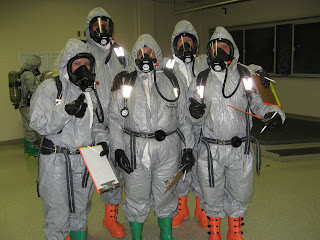 Other tasks we were throughly trained for in this Ag-Ert class were: 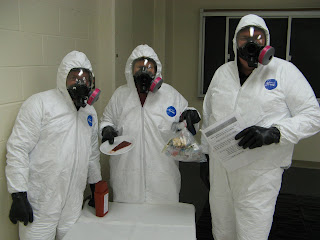 This class is suggested for Veterinarians ( required for State Vets ) , Vet techs, Ag Students, Law Enforcement, animal responders and anyone who is already involved with testing and monitoring our food systems.  Training was conducted both inside and outside in very "real" conditions.

PLEASE spread the word.
Posted by ~ Janis No comments: Links to this post 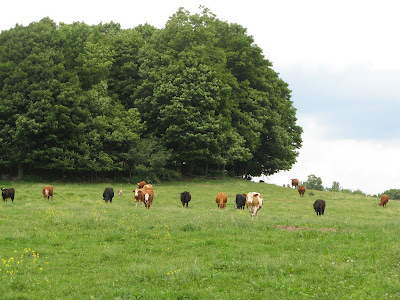 I called the herd this morning.   They were eager to answer.   As the herd came down the hill, I counted heads and tails and found an extra head. 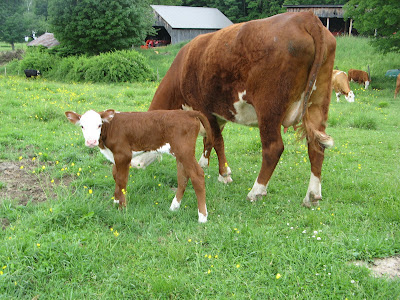 The 3 year old cow, Sunset, had a good looking boy.   He was really goofy and came right over to me to check me out.  He was probably born at sunset yesterday.  Appropriately.

We have been waiting since April for the last 2 cows to calves.  I check on them every day and there is never any change in their udders...until 3 days ago.  Sunset's udder started to get just a little larger and then I knew it would be soon.   Ahhhh relief.     One more cow to go.

Apparently the bull had a squabble with these 2 cows and waited until the last possible moment to breed them.

In November the vet who did all the cows pregnancy checks warned us there were 2 cows who were going to be "exceptionally late" calvers this year.

The last cow due is the one behind the new calf. 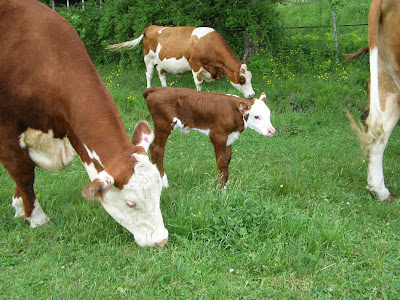 Anyone want to make a guess WHEN this cow is going to have her calf ?
The person who guesses the closest date gets a pint of pure Vermont maple syrup.
Don't be shy!!!   Make your best prediction in the comments section.
Guess the gender of the calf, if you would like to as well.
Go at it!
Posted by ~ Janis No comments: Links to this post

The best medicine for grieving is to stay busy.

With that in mind I took my semi housebound friend, Bonnie, for a fishing adventure.
Our tradition has been to find one "secret" unknown fishing place, per year.
We have found some really incredible places in the past.

Last year we could not do the annual trek as Bonnie had 4 strokes last season and was in the hospital and rehab for over a year.  Her right casting arm was parylized and she became seriously depressed when she realized she would never be able to cast her line into a lake ever again.  This is the woman who would climb UP on her roof in the winter and practice casting into the snow.  Or sit in her summer chair in a snow bank and practice casting into the snow.   Her passion is fishing.      Photo below is Bonnie doing her winter casting and getting her rods and reels "ready" for trout season, 3 winters ago, when it was 18 degrees outside. 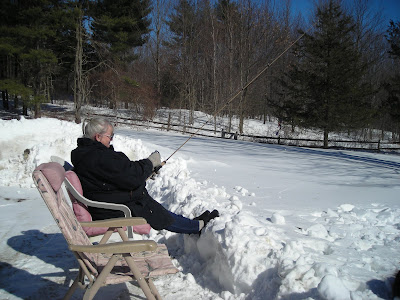 When she finally was transfered to the Rehab facility, I had many conversations with her physical therapists about using "fishing" therapy to give Bonnie some hope of getting back into the relm of bass & trout.  I drew fish on her black board in her hospital room and provided rod and reel for her special therapy. 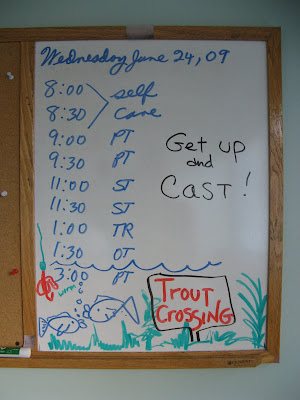 Patience and persistance paid off and I watched Bonnie making the progress necessary for a future fishing trip.
Slow progress all winter, but progress just the same.  She had to learn to sit up, walk, dress herself, use both arms, cook, shower, use a walker and then a cane.  Day after Day, week after week, and the months slowly rolled by.  Our daily conversations consisted of fishing fantasys and calving reports.

Bonnie couldn't walk the fields to see new calves this year either, or watch the moose in the fields like she had in the past.

But on Memorial Day I felt we could make our maiden voyage and go to the secret stream I located a few weeks ago where trophy trout had been quietly stocked by the Vermont Dept of Fish & Wildlife.

Yes, it was a bit of a down hill climb and some precarious stepping over big boulders and rocks, but we made it by taking our time and using her "all terrain cane."     Her joy was reflected in her face. 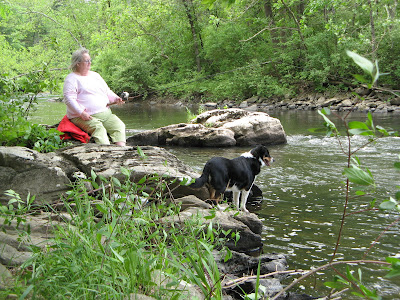 After snagging her first 3 casts in a tree, a bush and a rock, her 4th cast went smoothly into the upper stream and settled where we hoped would be a few dinner sized trout.  The only one more excited with all this fishing was my beloved cattle dog, who obsessivly watches the red bobber and anticipates a fish on every reel in. 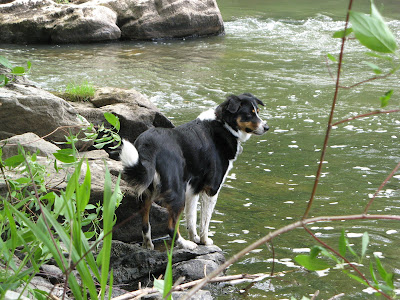 Within a few moments Bonnie's line went south and she reeled it in slowly and found a 7 inch trout attached to her hook. With quick removal and a fast kiss of the fish, she released it back into the crystal clear stream.
We firmly believe in Catch, Kiss and Release.  Except if its big and for dinner!

Just a few moments later her rod suddenly bent, she screamed, her cane fell into the stream and Bonnie lost the rod into the water.   My dog fell in after the rod, Bonnie slid in after the cane and I raced to grab dog, woman, cane and rod out of the stream.  After checking us all for injuries we immediately resumed the serious task of reeling the line in.

At the time I thought Bonnie had snagged her line on a rock or tree limb because she could not reel it in and I couldn't see her bobber moving at all.   Then with the 2 of us taking turns reeling the line in around rocks and a fast current, the prize finally was visable.  The closer it reeled in, the bigger it got, the more excited we became.  This was not another 7 inch baby fish, this was dinner! 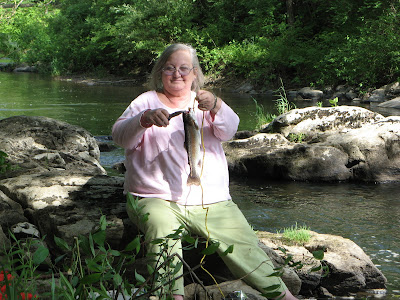 Bonnie put this 14 inch rainbow trout on her "keeper" line and when she sat back down she began to cry tears of relief.    It had taken 14 months of hospital, rehabs and half-way homes to get Bonnie back to doing her absolute favorite thing.  All the time and efforts of so many medical professionals paid off in dynamic style with the reeling in of a trophy trout in a secret stream. Bonnie had to do all the tasks of baiting her hooks, changing her bobbers, casting, reeling and removing the fish from her line. No easy feat for someone who was totally paralyzed on her right side by 4 strokes in a month.  No to mention getting down to this stream and then climbing back up the primitive path and back to the truck.

I am sure no one thinks of trout as a tool for therapy, but I can attest that it works.  It worked for Bonnie, and the whole time I watched Bonnie happily fish this stream I didn't cry about my dearly departed Gideon.
With that in mind, I intend to go do some trout therapy later today.
Posted by ~ Janis 1 comment: Links to this post