All is quiet in the barn yard.  No new calves.... yet. I know one will be here before the weekend. Maybe even tonight.    I was surprised there wasn't one waiting for me this morning. Violet is ready to pop any moment, but I realize I am the one who is always the most anxious during calving season... but photos don't lie.  I made my daily inspection of the entire herd this morning and this is what I found: 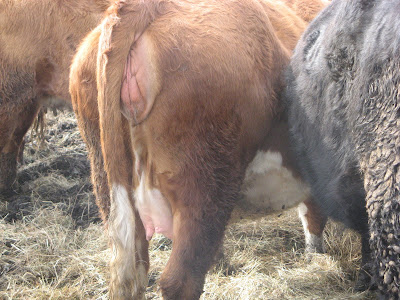 This is Violet. Her bag is swollen and her vulva is loose and getting larger by the moment. There is no doubt that she is next to calve and it will be soon.  As this is the official Vermont mud season, the entire barnyard and 3/4 of the field the herd is in-- is mostly mud.  The wind today is drying some of the mud out and it is suppose to drop down to 20 degrees tonight with a possibility of snow, so maybe that will help the current situation and firm up the ground a bit. However, down by the stream there is a nice sunny, dry area that some of the cows were napping and sunning themselves in this morning. 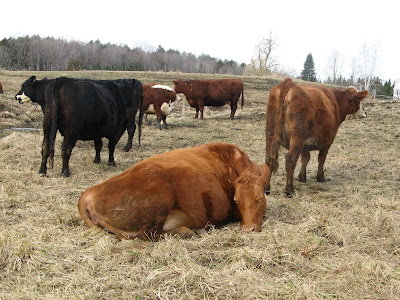 The herd is relaxed and peaceful. Well fed and comfortable.  The sugar makers are praying the temperatures get colder at night and warmer during the days so the sap will run again before the first buds start coming out on the trees. Once the buds appear on the maple trees then making maple syrup is over until next March.  This weekend is the BIG sugar makers Open House all over the state. Hundreds of small sugar maker's sugar shacks will be open to the public for tasting of all their products. You haven't lived until you have had maple syrup, just made, in its many forms: candy, ice cream, coffee, brownies, the list goes on. Lots of taste testing this weekend.   All the mud season rutts and roads will make the trip to some of the more isolated sugar shacks that much more adventurous.  If you are around our area of Vermont, please come visit the herd.    Wear your boots~! 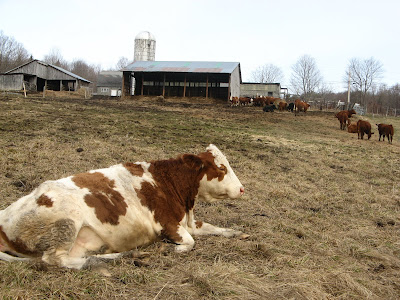 Remember to support your family farms and buy local.
Posted by ~ Janis 1 comment: Links to this post

The past 2 days have been in the 50's and the ground and mud are drying out.  The pregant cows are content and are eating lots of hay plus laying out in the sun.    My bred yearling, Violet, is my guess for having a calf next.  She is showing all the signs.    She "met the bull" on June 18th of last year, so the earliest she could calve would be March 24th, if they consumated their first date.  Certainly looks like it from where I am standing, as she grows larger every hour. 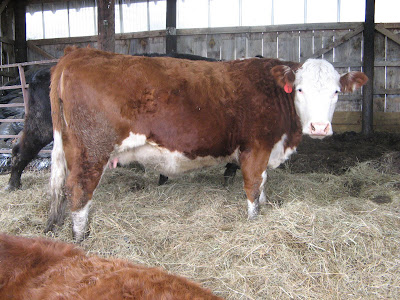 Violet is a long, thick bred heifer.  She was born April 25th 2008.  Her mother is a Registered Simmental and her dad is a Registered Polled Hereford.  She represents the best of those two different worlds.    Simmentals are a lean, long, fertile, gentle, european, grass based milking cow of the higher Swiss Mountain regions. They excel on grass, higher altitudes and harsh weather. They produce heavy feeder calves and quality carcasses. Usually grading high Choice and some Prime.
Cross Simmentals with any British breed, such as Angus, Hereford, Devon, Shorthorn etc, and the offspring that result are even more superior than the parents.  The hybrid of the 2 breeds has more intra muscle marbling, making the finished carcass grade more consistantly Prime.  And because of the length of the Simmental, there will be many more value cuts in the loin area than in a straightbred british breed.
Most of my top producing brood cows are half Simmental and half Hereford or Angus. I can breed these cows back to another british breed or Simmental to keep the traits I need in those resulting calves.  The Simmental/Angus crosses are called SimAngus and the Simmental/Hereford crosses are called "Smurfs."   I am sure there is a better, more media friendly name for the Sim/Heref crosses, but I really love calling them Smurfs.  I often tease my friends and say at 4 pm its a real toss up between my cows wanting to Yodel and them wanting to go for Tea.
As is my practice, I named Violet after a very very dear friend who has done many good deeds in her life. Unfortunately my friend, 91, is dying and may not be alive to view photos of Violet's calf when it is born.  She did ask me to name the calf Viola, if it's a girl.   And this I shall do.
Posted by ~ Janis No comments: Links to this post

It's official:  Calving Season has begun.

The first calf arrived last evening under the watchful eye of the herd.   This is the first calf for this particular young cow and she has done a wonderful job.   We used a new bull last year so there is much anticipation about what kind of calves he will have.  His information looked great on his registration papers, but its another thing to actually see those statistics in real flesh and blood.    This calf was born small and popped out with no assistance needed, and that is a priority here. He is also up and nursing heavily. Something else I delight in seeing.
Mother Nature is cooperating as well: Most of the mud has dried out from 2 glorious days of sunshine and soft winds.   May the mud continue to dry and may the rest of the herd have calves before more rain and cold return to the north country. 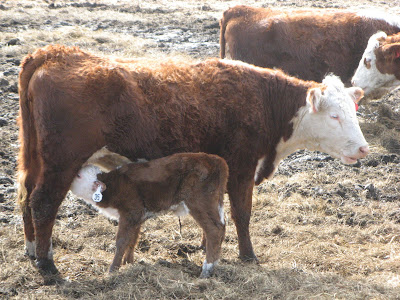 Of course his name will be Patrick. .....Much better than "Cabbage."
Posted by ~ Janis No comments: Links to this post

Tis a special day today.  I have been celebrating, in small ways, since March 1st :   I slowly weaned myself off of my crutches, almost completely.  I started driving again and kicked all the mice, who moved into my sedentary truck, out the door!   I went out for some homemade awesome pizza with a friend I had not seen in 26 years.  I visited horses. I kissed all my cows regardless of the 2 feet of mud I got stuck in.  I wrote a check for someone who needs help. I called my mother every day this month.  I tried not to swear more than 4 times an hour. I tried to actually eat a decent meal once a week.  I did laundry and did not mix the whites in with the colors. I filled the bird feeder.  I watched the news and didnt change the channel 18 times in 10 minutes.  And of course I wore me green every single day.  I love March. I love calving season. I pray there is no more mud when the calves start hitting the ground.  4 days of torential downpours has eliminated all the snow, created ponds in places that have ducks and geese on them and increased the amount of mud ten fold-on every dirt road in the state. I love March Madness, Mischevious cats, Mud Season, Pizza with 4 cheeses and healthy newborn calves.
As the Gold Prince would say: " Happy Saint CATricks Day." 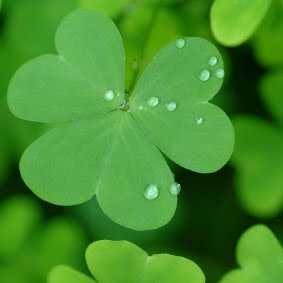 The birds were singing early this morning, the sun was shining in all my windows and the soft spring winds were gently blowing thru the many cracks in the walls.  It feels like spring. The air outside smells like cold soil and sweet maple sap.   The roads are thick with mud and many a small car can be seen in the road side ditches, their tires sucked in by the deep mud.   Mud season is here.    It is also mouse and mole season. They are out and exposed, to the delight of the barn cats. The Gold Prince was out looking for a meal or two today and hiding behind the big door waiting for a meal to run by. 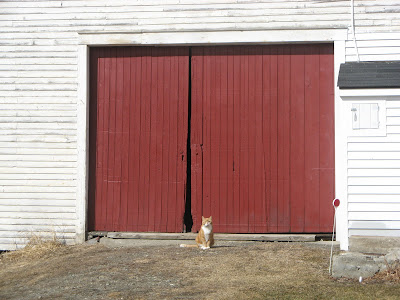 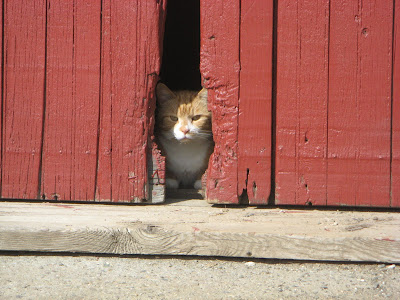 Today is a state holiday. The roads are empty and there is a hush all over the Green Mountains.  Everyone is at their town meeting hoping that town budgets get passed. If they don't get passed then many many teachers, police, firemen, animal control officers and other town and city service providers will be out of a job.  Its been a tense 6 months here as more and more people get laid off and businesses close down.
I took a ride today to practice my driving skills, with crutches, and to see the local sites.  While we all hold our breath in anticipation of the outcome of each and every town meeting in the state, here is my outside photo of the day: 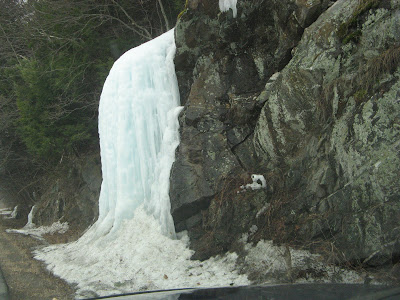