From my garden diary in June:

The sun and rain has made the rose bushes all bloom like crazy.

It has also made a zillion weeds start growing in my garden. I have a weed control plan and need to put it into action today. 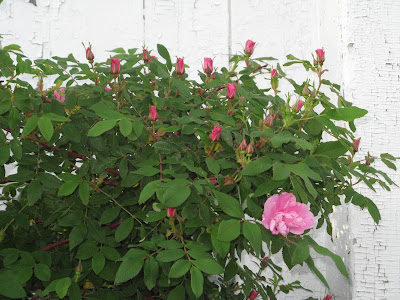 Meanwhile, the hens enjoy napping ON the porch, in the sun. 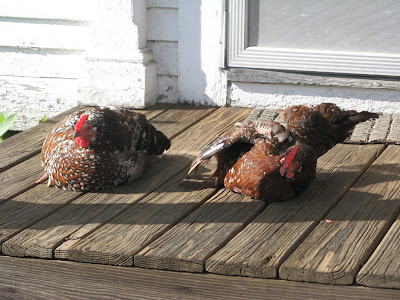 Mavis actually let me take a few photos in front of the weeds and roses.
She has always been a bit camera phobic, so her sitting and looking at me while I snapped the photo, was a real treat. 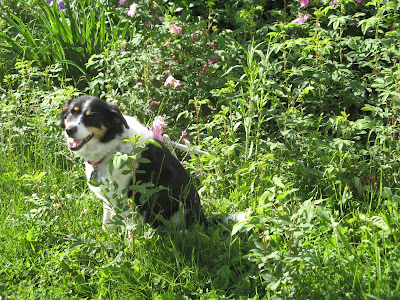 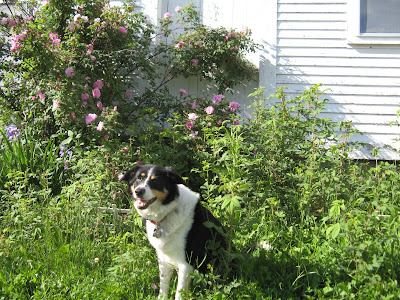 My farm friends gave me 50 empty grain bags so I could cover my garden with them and some straw so I could keep the weeds down.

My goal is to keep weeding to a bare minimum this year as I am busy with the Community Garden,  the 250th celebrations and organizing a Tour D' Coop. 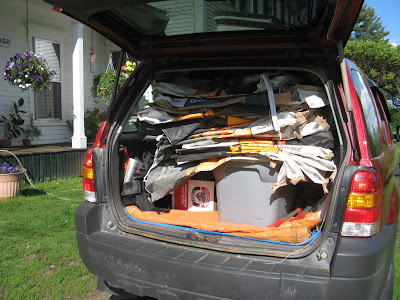 Mavis again laid down for a quick photo.
Must be a special day. 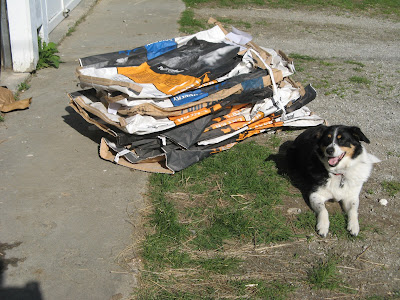 The hens came and pecked at the few grains left in the bags after I cut them in half. 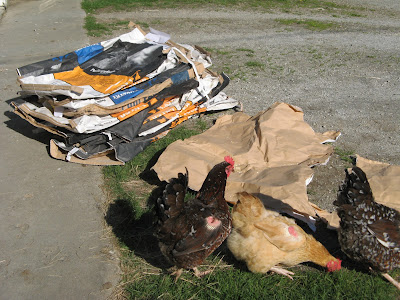 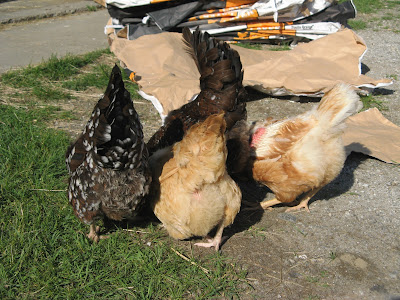 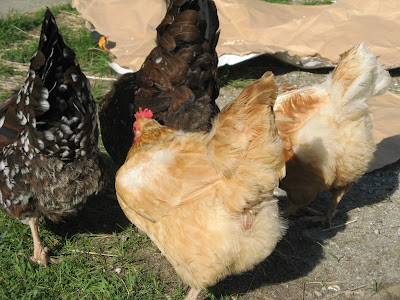 I have another 50 grain bags in the garage to add to the pile.

I need a lot to cover the garden.

I spent an hour opening the bags up and splitting them in half so they will lay flat on the garden. 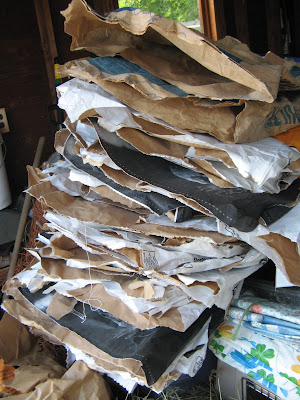 The 6 bales of straw arrived a few hours later and of course the flock came by to check them out. 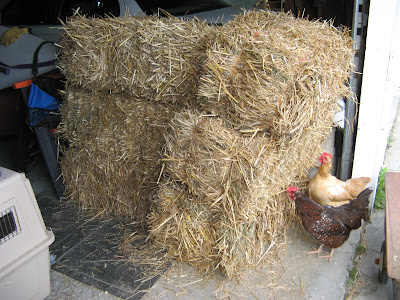 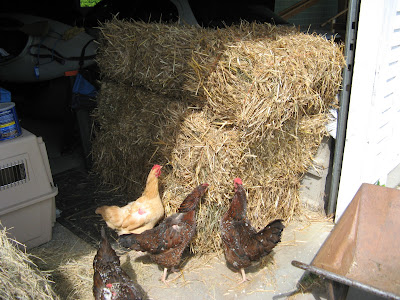 As they inspected each bale I went to collect some eggs.

I was pleasantly surprised to find 5 today. 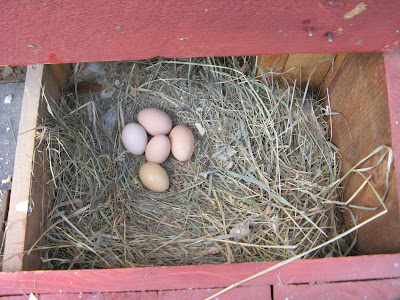 There is nothing better than eating fresh eggs! 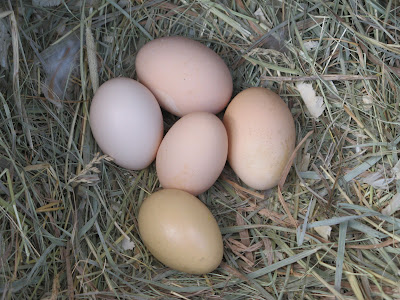 I laid down the grain bags along my paths in the garden as well as some newspapers around some of the veggie plants. 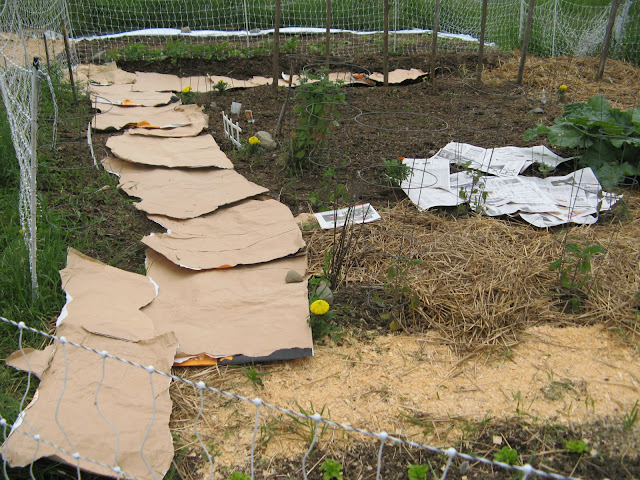 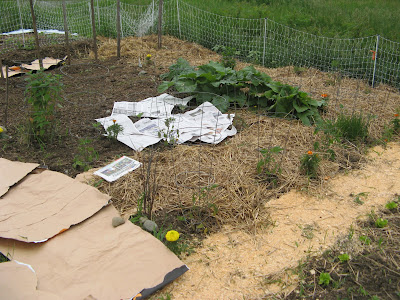 Looks a little like the Fidelity path from the commercial.... 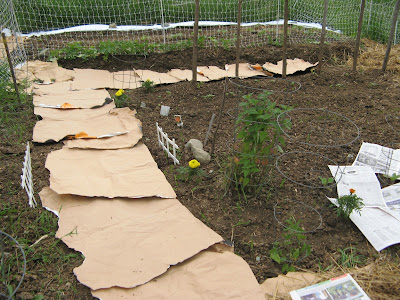 Then I dragged a bale of straw out to the garden and proceeded to cover the grain bags with it. 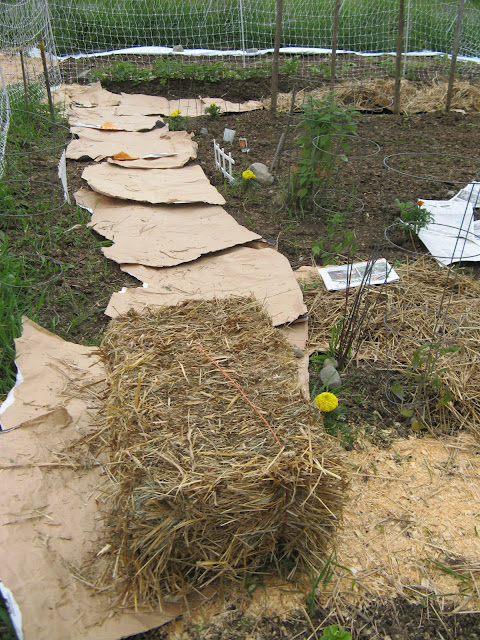 It didn't take long before I had most of the "bag paths" covered with straw. 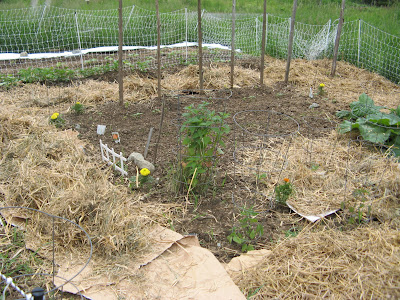 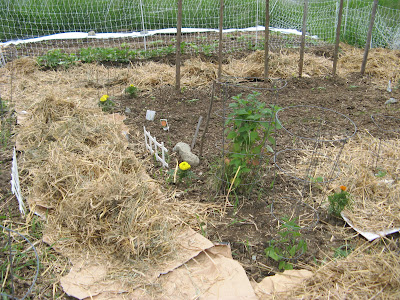 I am still working on it.  The rain came that afternoon and mashed the straw down perfectly.

What kind of weed control are you using this year in your gardens?
~
Posted by ~ Janis