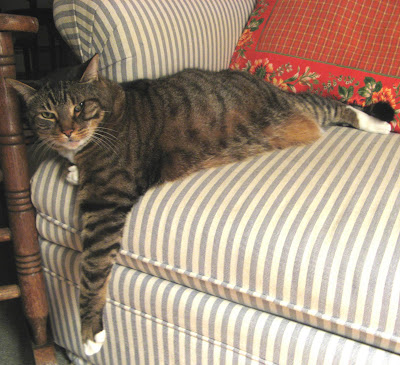 He was found in a leg hold trap many years ago, out in the woods in the winter, by two kind hearted souls who rushed him to the local animal hospital and paid to have his mangled rear leg amputated.
After an extended recovery period my landlady adopted him and he came home to this huge 1848 farmhouse in the middle of nowhere.   He became a house cat, was named Gideon after the Bible and became the absolute constant companion of my landlady.    Not only could he hop around on three legs, he could climb on the furniture, beds, up the stairs and could catch the shrews and mice that frequently race around this huge house.   Gideon was also a very vocal cat.  Especailly at 5 am and 5 pm - his chosen feeding times.  If my landlady was away for the weeekend, he would hop up the stairs and yowl and howl until I got out of bed and came down the 22 stairs and out to the freezing kitchen to make him breckfast.   It was usually 4:55 am.    He would repeat the screaming 12 hours later.  I could hear him from the driveway when I would pull my truck in, hoping to feed him before he started writting letters to all the State Senators about how he was never fed on time!    Daylight savings time ALWAYS created total chaos with "his" routine.     Easy to say, this cat ran this house.
Gideon was a real charactor.  If you were eating dinner on the couch and watching TV he would tap your arm with his paw, balancing on 2 legs, to remind you that you had to share some morsels of chicken or fish with him.  His gentle tap on my arm or leg always made me smile.  And of course I always obliged him my best tidbits of food.     Giddy was always talking and would answer any conversation with his opinions. I could hear my landlady constantly chatting with someone downstairs morning and night. I often wondered who was visiting her at these strange hours until I realized that it was Giddy she was conversing to and it was he who was answering back to her.          Also amazing, he could recognize his moms vehicle coming down the rural road a mile away and would hop to the door and start his special yowling for her benefit.    He really loved my dog and gave her a complete face and ear bath when she returned from having a tumor removed from her mouth and would often give her "special greetings" when she returned from a long trip with me.  She reciprocated and frequently washed his ears when no one was watching.    Eight months ago Gideon's remaining hip joint failed and he could barely move.  He struggled to reach his litter box in time, so we rearranged the entire downstairs of the house by moving furniture and covering the floors in plastic and newspaper.   It was a labor of love cleaning up after this boy. He picked one spot and was consistent and clean.   Antibiotics and pain meds helped his slow recovery and 6 weeks ago he again was able to come up a few stairs to howl at me, before the sun came up, to come feed him.     Without warning or reason he started to lose weight about 2 weeks ago and stopped being his usually demanding self.   When I returned from a job this past Tuesday my landlord told me that Giddy was dying.  He could no longer follow his beloved mistress from room to room and keep up an ongoing conversation with her.    He was an estimated 15 years old and had run out of energy and life force.       Yesterday my grieving landlord made the final act of love for this courageous cat and made the final drive to the local vet. 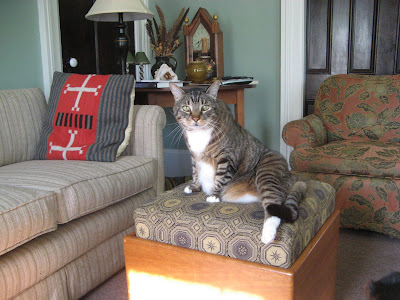 Today the house is quiet.             I came down the stairs this morning and the entire first floor is rearranged back the way it was 8 months ago. No plastic or newspaper on the floor, the couches are put back into place, curtains rehung on the windows, table returned.   However, there are still several special "tuffits" where Gideon loved to take naps. They are still in place.  A gentle reminder of the great cat who graced our lives and lives on in my heart.
Posted by ~ Janis