Almost all of the calves have been born and the fields are alive with calves running, sleeping and drinking. The grass is lush and the calves really stand out in the lushness of the fields.
One of my favorite cows is Red Sox Faith.  I absolutely Love this cow.  She is friendly with kids, cats, dogs, woodchucks, everything. She is very gentle and calm. I brush her, rub her and tickle her ears.  She was born 4/4/04.  She is 3/4 Angus and 1/4 Hereford and is a light honey colored kind of gal with no white markings other than a little birthmark on her shoulder. Her mom was cool and calm and I loved her as well.
The minute Faith was born and entered this world I named her and claimed that "THIS was the year the Red Sox would WIN the World Series."       And they did.
Two years later in 2006 she had her first calf, whom I named Red Sox Fenway and the Red Sox won again.
In the following years she had Red Sox FlyBall, Red Sox Frank ( Terry Frankonia ) and last year her first heifer, Red Sox Fan ( Fanny ).  All weaned over 600 lbs, all were reserved by repeat buyers, all graded high choice and prime on the rail at 18-20 months of age.
Two weeks ago she had another boy and I named him Red Sox Fielder.  It is getting harder and harder to come up with "F" names with baseball topics. 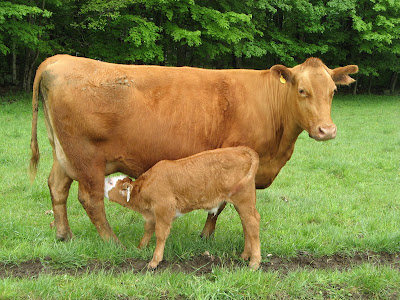 For you who have been reading this blog faithfully, you know that the farm where my cows are is in a"transitional" phase. My old farmer friend's health is failing. He has been in the hospital off and on all winter and last month had a toe amputated and now has been back in the hospital for 2 weeks with mercer.
His wife is in a nursing home. They just celebrated their 60th anniversary and their birthdays in seperate facilities in different towns.  He has passed the farm to the next generation and they really are not equiped with the time or patience to deal with a large herd and all the fencing and details that keep a good farm running smoothly.
Having experienced a rather frustrating winter watching more and more issues arise, I knew I had to make the agonizing decision of drastically downsizing my cow herd as well as my replacement heifers.
Fortunately, I have been able to sell most of my beloved herd of cows to people that are on the "same page" as I am and who will sell me back some of my own grassfed genetics when I find another farm to bring my cattle to.   Meanwhile, several new New England farmers have benefited from my present situation. With every truck load of cows I deliver to their new homes, I see happy faces waiting for us to arrive. I always leave a bit sad knowing my farming future is in limbo until I am able to locate farmland that is affordable, fenceable and appropriate for my cattle.
Yesterday a relocated Texan, his wife and 6 young children came to see my cattle.  He raised traditional ( red and white ) Simmentals in Texas and dearly missed them.   He brought a thick photo album with hundreds of photos of his former herd.  He had been searching for good Simmental in the Northeast for months and couldn't believe his luck when he found me, just 2 hours from his Vermont home.
His reason for buying cattle now?  He had applied for a USDA loan on a farm house and 50 acres that he wants to buy this summer. He should be approved by August 20th, if everything goes well, and picking up his first cows by September 1st. 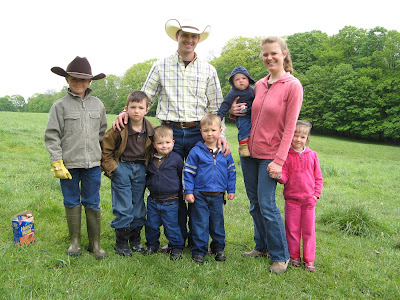 This man was like a big kid in a candy store....He walked out into the field, full of frolicing calves, and immediately picked out a 4 week old heifer from one of my cows and said he wanted her when she is weaned in Novemeber. Then he turned around and pointed to Red Sox Faith and said he wanted that cow as well because she was child friendly and his kids could handle her.  I was stunned.  Faith has never been for sale.    Then I pondered about this opportunity and what it meant for his family, especially his kids.
So it is with some sadness that I will be saying good bye to Red Sox Faith, one of my BEST cows and send her to her new life being the first cow on this young farmers new farm.  He will continue the Red Sox line of good, calm, gentle, grass fed cattle.   He even agreed to hang a Red Sox banner on the barn wall.  His wife is waiting for one of my Simmentals to calve and is hoping for a red heifer.  I am too. So there could be some fighting over who gets that heifer..... Should be fun, but I know in the end I will be sending her their way. There is no greater honor than having your cattle chosen to start a new venture for a new farmer.

UPDATE: Sadly, this family did not recieve the USDA loan that they needed to buy their Vermont farm, so Faith, Fielder & Jillian will be moving with the herd to a temporary pasture on September 1st in our move to Northern Vermont.  Hopefully next year, this family will again walk the fields and pick out their future herd from the TailGait Farm cows.
Posted by ~ Janis