If photos of injured calves make you uncomfortable, you may not want to read this posting.

This is what the hoop barn looked like Yesterday.  Cows and calves come in here during the day and night to chew their cud, nurse, eat hay, get out of the weather and take a load off their hooves. The cows have 24/7 access and this barn has been our primary barn and a blessing since the other barn burned down December 18th. 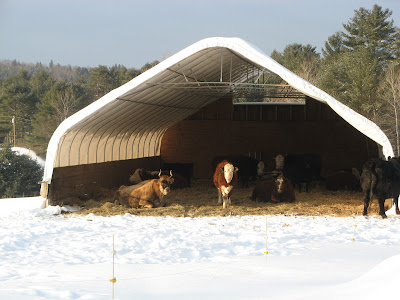 And this morning, after last nights freakish heavy snow, thunder, lightning and rain storm, this is what I found: 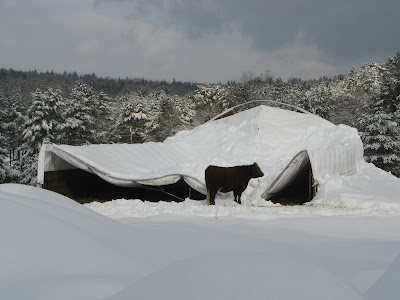 I was alone at the farm as the two mother cows "told me" that their calves were trapped inside the collapsed barn first thing this morning. Tiny Tim's mom and Panda's mom were both screaming and trying to crawl under and onto the collapsed roof of the barn. 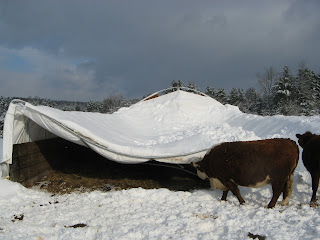 No noise came from within the barn.    I heard no calf bawling for their moms.  Things looked grim.
I cursed myself for not having a tractor to unbury the barn and try to find the calves.
There were two openings under the collapsed barn that I wanted to go into to see if I could find the calves, dead or alive. Only a few minutes had gone by since I first discovered the barn and I was moving and thinking quickly.
I made a phone call to the only person I know up here who knew someone with a tractor and bucket loader.  She talked me out of crawling into the barn to search for calves.  As a disaster responder, I know that I shouldn't go in alone, but I wanted to! 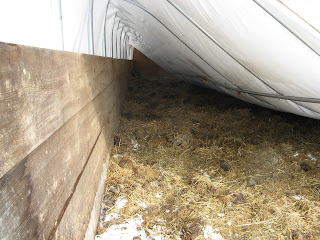 It was then that Tiny Tim's mom started crawling on top of the canvas roof of the broken barn.  As I hustled to get her off the roof and the deep snow, I discovered a calf that had been dragged thru the roof of the barn and wrapped in a blanket. 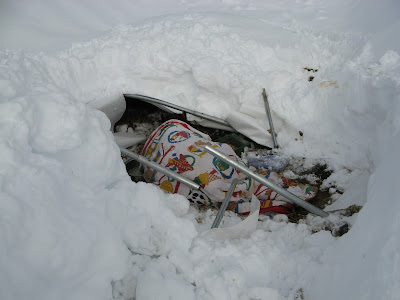 I was both relieved and distressed.  Relieved that at least the farm owner knew the barn had collapsed, relieved that a calf was alive, but distressed that it was not up and walking. It was silent and laying there. It was Tiny Tim.   His ears were cold.  I hesitated to look under the blanket. I hate the sight of broken bones sticking up thru skin.
Knowing the entire weight of the barn, snow, ice and heavy pipes must of been on top of his small body for hours before the farmer miraculously located exactly where he was, in the center of the barn, and then shoveled the huge amounts of snow off of him and then cut the heavy canvas roof away to extract the calf, made my head spin. I didn't want to look under the blanket.  But I had to.
I did.
I didn't see any blood.
I didn't see any bones jutting out of his cute hide.
I didn't see any pipes stuck into his stomach, or anywhere else.
So I raced to my truck to get my survival blanket that I always carry. The one that looks like tinfoil on the inside and reflects body heat.
As I went by the herd again, I counted heads.  Then I saw Panda behind the club house shed chewing her cud.  I rejoiced.  She wasn't in the collapsed barn like I thought she was.  She wasn't dead like I thought she must be. Alive.  Chewing her cud.  Another miracle.  Panda's mom is the grandmother of Tiny Tim. So she was the one yelling the loudest for him, right alongside her daughter who isTiny Tim's mom.      Cow families stay loyal.
I grabbed the tinfoil blanket from my truck and returned to Tiny Tim.  I wrapped him in the blanket.     The sun was out, it was 22 degrees.   He now was somehow crawling back under the barn roof. I didn't have the strength to drag him backwards. I tried, but there were too many pipes and I was sliding around on top of the slippery roof, snow and ice and couldn't get firm footing.
Like most old farmers, both my knees need replacements, my rotor cuffs are gone and many discs in my back are damaged. I am no longer the strong girl I used to be.    So I prayed.
I really prayed to God for MUSCLES.  I prayed and I screamed. I need Muscles!!
I need to get this calf away from this dangerous situation. 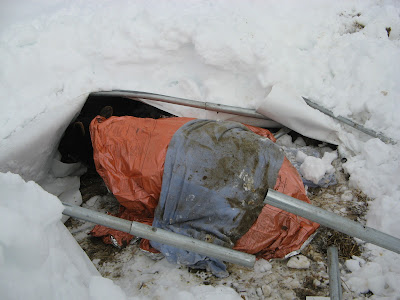 
In the form of FARMERS
Farmer Chip returned home and we tried to extract the calf together.
Couldn't do it.
Then two more farmers came. The McClure's. The result of my friends phone call. 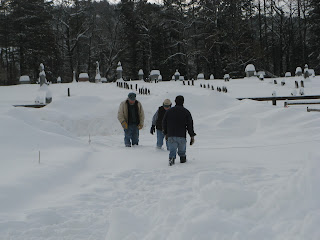 This is the same farmer who towed me out of an icy snowbank last month when my 4 wheel drive broke in my truck.
We struggled to get some kind of firm footing on the slippery roof. Farmer McLure fell and had a hard time getting vertical.  We were Four big adults trying to do critical work in a very small space. As much as we tried to get the calf to stand up by supporting all four of his quarters, he could not stand for more than 5 seconds.   We had hoped to walk him out of this area.   We now went into Plan B.
As Tiny Tim's mom watched, we carefully maneuvered his heavy body around and over pipes, snow and holes in the roof. 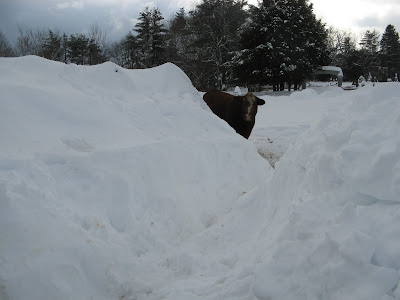 I made a halter from my Katrina dog leash that I always carry in my pocket and farmer McLure slid the calf the rest of the way off the roof and onto firma ground in front of the once proud barn. 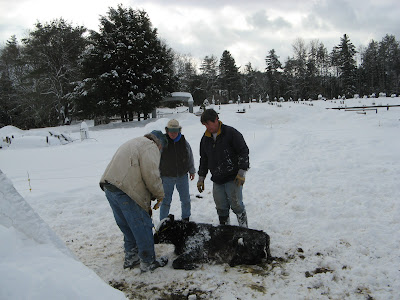 Tiny Tim's mom came over immediately and made it very clear that she was taking over from here. 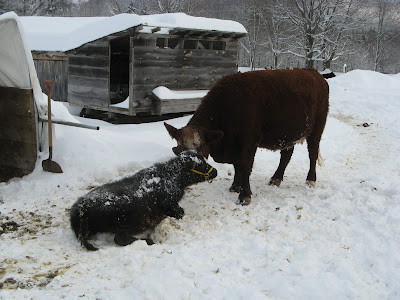 The entire herd came over to greet the rescued calf.
Just like survivors from avalanches, surviving a barn collapse is rare. 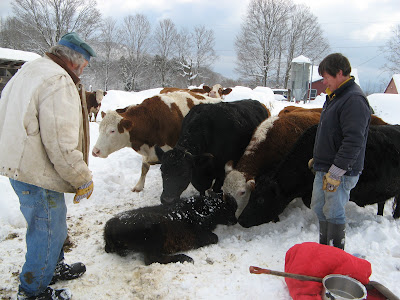 I prompty headed to church to give my thanks for my prayers being answered for muscles.  I was late getting there, but very glad to be there.

When I returned to the farm, the calf was still laying down and it was obvious he had not stood up yet.  The herd had stayed near him all morning. 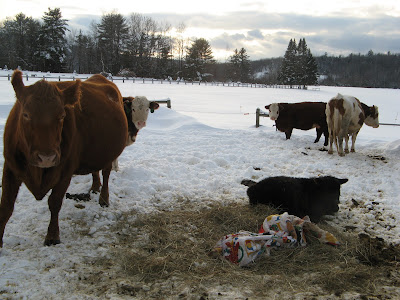 I gave him a quick look over and found a large lump on the back of his neck.
The bruising and swelling was now more evident than previously.
I still prayed that he would stand and resume his normal life
I went to my truck to get my trusty thick PolarTec blanket to wrap the calf in to keep him warm. I also covered him with hay and another blanket to keep the drafts out.
Tiny Tim started eating the hay as Gracie stood watch. 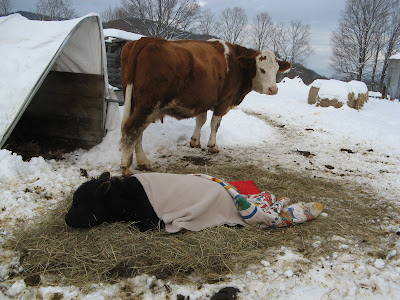 Tiny Tim's ears were warm (important in calves) and he was munching hay at a good pace when I returned to water the herd this evening.
He still hadn't moved. 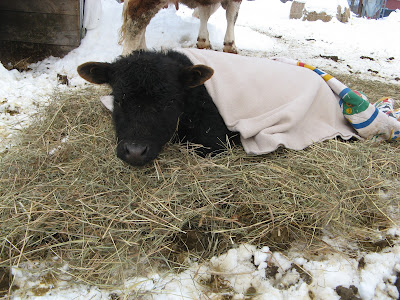 I continued to bring him hay to eat and hay to pack around him to keep him warm tonight.
With no other shelter to bring him and his mom to, he will be bedding down where he is. 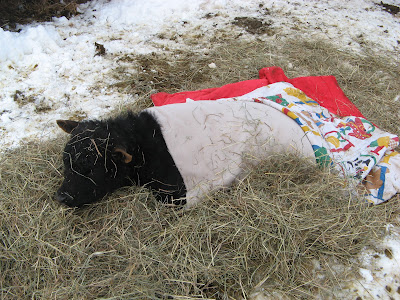 Tonight a young calf lays in front of a collapsed barn, protected by a herd of gentle cows.       Please say prayers for Tiny Tim. 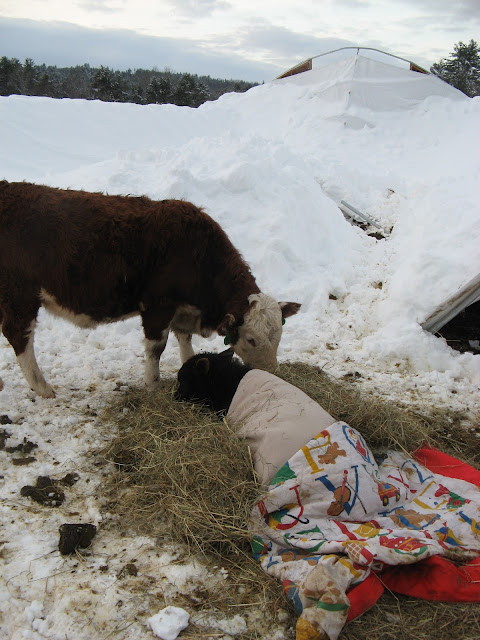