Last night was the annual Seed and Plant Swap held at the local village library.

The ever patient librarian, Peggy, had invited me to this special event last week.    That kind woman is always trying to socialize me.

I unpacked all my 40 packages of various seeds from 3 years of "over ordering" and swapping with other obsessed gardeners, plus I bought some flats of tomatoes, yellow peppers and brussell sprouts at the local grain dealer to round out my possibilities for a good swap.

I was the first to arrive and laid out my goods on the big library table.
Each person who came had a box or two of carefully packaged flowers, shrub branches and envelopes of seeds to swap.

One smart man brought nothing except homemade brownies, a huge bowl of cut up watermelon and orange juice for us all to indulge in while we explained our numerous seeds and plants.   He went home rewarded with heritage seeds and blue poppies.

As the hour of swapping grew near, there were 8 of us.

But...there was also a woman in a different room, using the computers who, unbeknown to us was listening attentively to our conversations about plants and seeds and soon bounced over to our group, grabbed envelopes to put seeds in and later went home with much seed and a big smile. 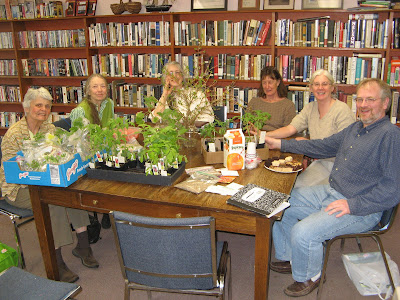 While waiting for a few others to show up I took some photos of this
happy, diverse group. 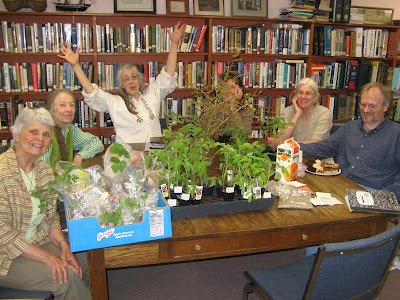 As the swap began each person explained what they brought, what that particular plant or seed needed (sun,shade, acid or clay soil, etc) 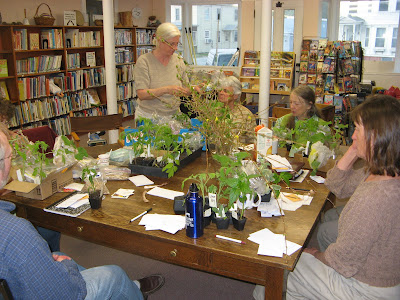 I brought 2 pods of Dr Rowe's rare heritage shell beans to share with everyone. Each person took a few bean seeds and promised to save some seeds from their harvest.       You can not buy these seeds anywhere on the face of the earth.  They are the last of a 97 year old country doctors family collection of seeds that spans 3 centuries. 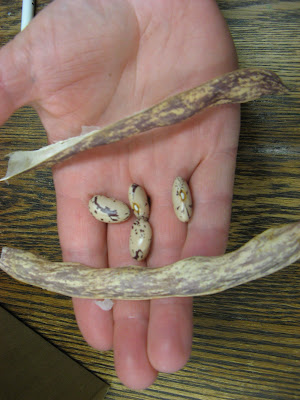 By the end of the night, 70% of my seeds had new homes and I had a nice box full of various plants, including a rare Moonbeam flower (only flowers at night) and some delicata squash seeds. 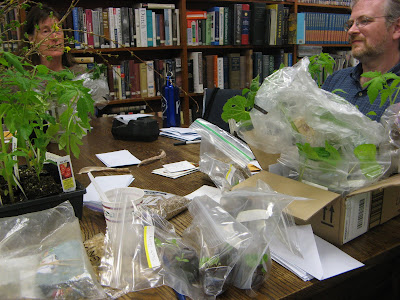 As if that wasn't enough excitement, one of the women offered to take some of us out in the woods the next day to look for "ramps" and find other spring time edible plants.
I wasn't going to miss out on an opportunity to play in the woods and see new sights so I said I'd go.

The next morning after I checked on the herd, I got picked up by my wonderful librarian and we were off on a woodsland aventure! 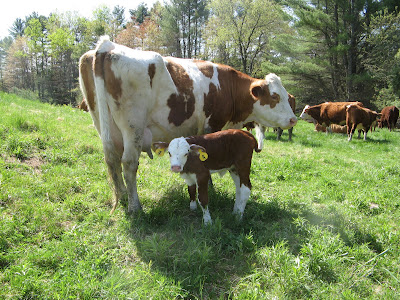 First stop was a swampy area where we found marsh marigolds, which are also 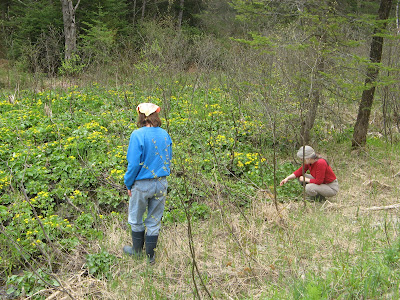 And bears, coming out of hybernation, look for these first in the spring as they are full of nutrients! 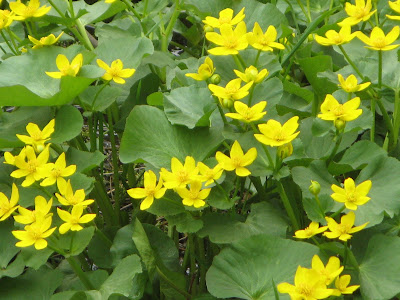 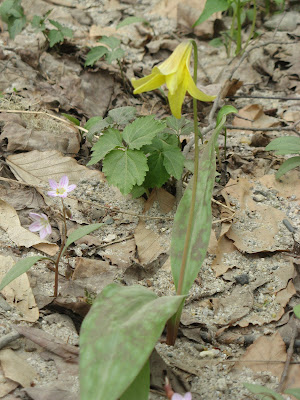 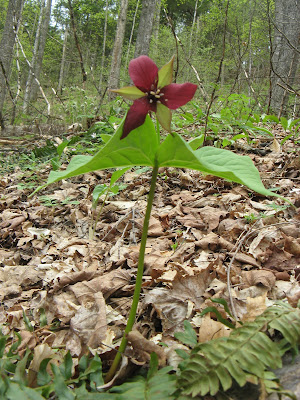 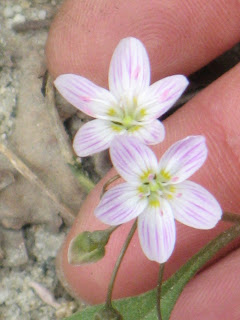 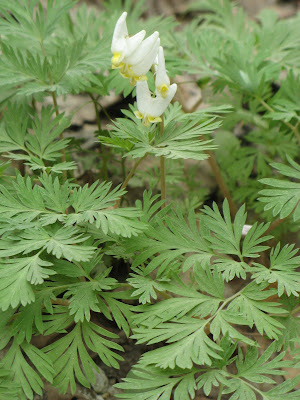 Peggy and our tour guide, Linda, point to it.

Wild Ginger has a very ugly little red flower at the bottom of it. 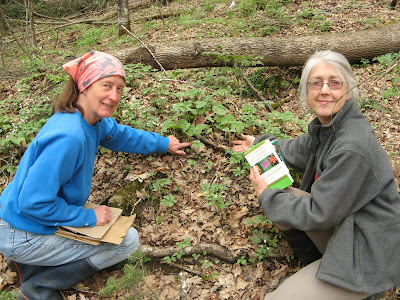 Finally we found what we had been searching for:  RAMPS

A delicacy.  And only available for a short time until the trees leaf out. 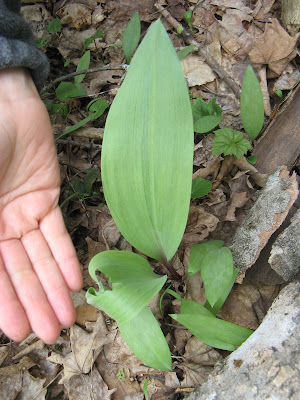 Ramps are also called wild leeks and taste like an onion.
They carpet the floor of the woods on most steep slopes.
We picked a few small bags of the leaves as we walked along the woods scanning the area for these tasty treats.  We only picked 2 or 3 leaves per bunch so as not to denude them.
I can't wait to make a whole wheat and Miracle Whip sandwich with these nice flat yummy leaves. ( I did and it was DELICIOUS!  I also put some leaves on my grass fed beef and emu burgers! FABULOUS! ) 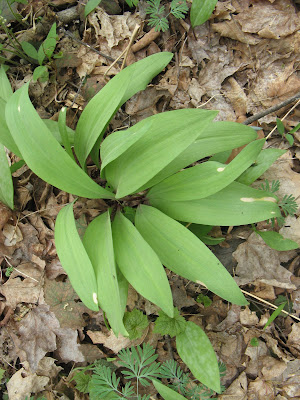 This is actually squirrel corn.  It only looks like the Dutchmans breeches, but it is different. 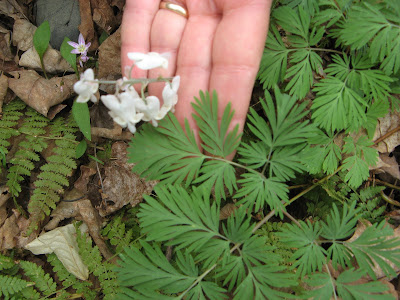 When you pull up its roots it has these nutty corn looking things on it.
Edible. 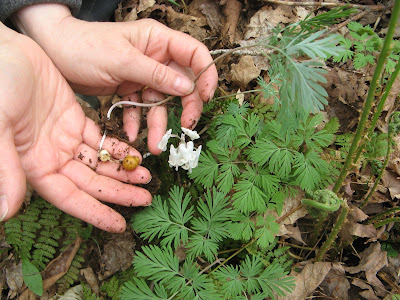 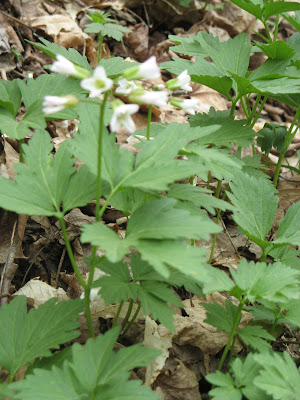 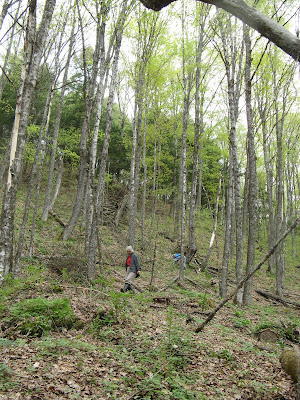 As the morning wore on, we found a nice carpet of fiddleheads near a clean running mountain stream.   The sound of this water rushing by, while the birds in the woods were chirping, was just wonderful. 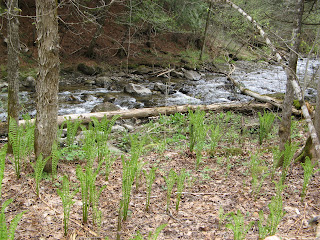 There were still some immature ferns that had fiddleheads asking to be picked. 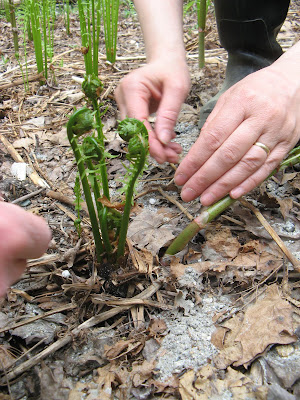 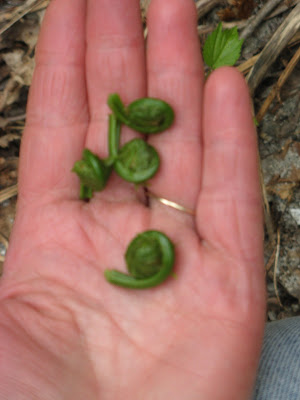 We learned about the different kind of stems and what to look for. 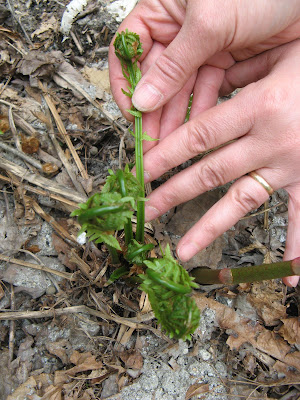 I am going to go look for some Euell Gibbons books.
He is the author of Stalking the Wild Asparagus.

He was a woodsland "gatherer" and the first person to really live it and write about it.
On our way back home we passed some very scenic hillside farms with trees in bloom. 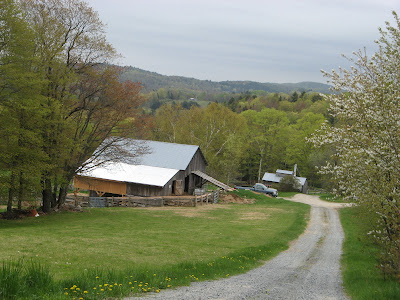 Consider having a seed and plant swap in your own library or at your house.
Invite some friends.
You just never know what it will lead you to or what great information you will garner.
Enjoy.
Posted by ~ Janis