Yesterday morning at breakfast, cowdog Mavis suddenly went ballistic: Barking like a screaming habanchi and running from window to window.  It was snowing lightly, with 10 inches of fluffy snow already on the ground from the past several days and there were no dogs or deer infringing on her property rights and no joggers going up the rural road either.   I saw nothing, except the tracks of the flock as they headed back to the coop to get a snack.

I got up and opened the door and out bombed Mavis. She zoomed to the far side of my truck and I saw a flash of something run from the truck to under the porch steps.  I thought it was a mouse because I saw 2 inches of a dark colored something.  And 3 weeks ago I had to have a burning mouse removed from my manifold, plus The Gauntlet mouse trap my practical brother gave me for Christmas is catching mice at an olympic rate, so I naturally assumed it was a mouse.

I called Mavis back into the house and she reluctantly came.   She sat by the window and growled while I continued with breakfast.  All of a sudden I saw the something come out from under the stairs. Mavis almost jumped through the window.


Here is what I saw...as it ran back to the other side of my truck. 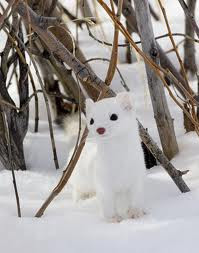 I felt a shiver run down my spine and leaped for the door to let that new weasel dog of mine back out to protect the flock as I ran to the chicken coop to put the birds in Lock down!

Mavis ran the varmint back under the stairs and I could hear it hissing and chirping from way over by the coop as I counted the flock and locked them in. 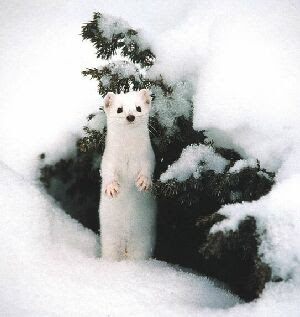 When I went back to the porch stairs the weasel was involved in a rapid game of trying to bite Mavis from the little opening at the side of the stairs.

It would stick its head out and try to nip at Mavis and then chirp and hiss.  "Our weasel" had bright pink beady eyes and a pink nose.

Very healthy looking.
I was glad to see that.

I could not believe how tiny it was and how bold it was.

I was so focused on what was now under the steps I didn't even think about my camera, so I am using the photos of others who have also experienced a close encounter with an unexpected winter guest. 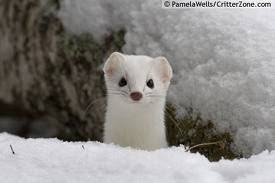 How Mavis ever saw this tiny white creature in the snow is beyond me, but she alerted the household and just about the entire neighborhood to its presence. 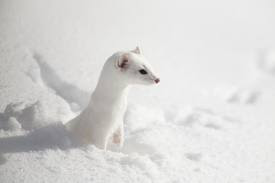 This past summer I had seen a tiny brown one cross the road  about 100 yards from the house.

It looked like this in its summer coat color
These short tailed weasel family critters are called ermine.
Though the centuries their fur has been used to decorate royal families clothing.

Browse "ermine" and ancient portraits of royal families covered in white ermine furs through the centuries will pop up, some with ermine sitting on their laps!

These ermine are very beneficial to places that have many voles, moles, mice, squirrels and chipmunks.
I got the full menu here. I should change my farm name to the Ermine Diner!

I am sure this boy was here to eat the abundnace of mice that stampeded in to this old farmhouse once it started to get cold last fall.

As I read more about them, I became convinced this was so.

Read this info and see what I mean:

A Tiny Warrior with inexhaustible concentration 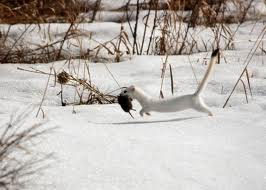 I am not going to trap him as long as he leaves my flock alone.

His judgement may have been fuzzy from hunger when he chose this farm instead of the others on this road, but I am sure now that he has been confronted by a real Vermont weasel dog he may now rethink his decision to dine here.
Although he is free to return to reduce the ever growing population of chipmunks, squirrels and mice. 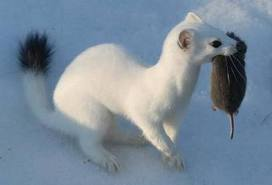 Once the flock was locked in, I brought Mavis into the house and we watched from the windws to see if our new visitor was ready to leave.

Neither of us saw him scurry away, but this morning Mavis showed me that there was no sign of him so I let the flock out and supervised them in this 25 mph gusty windy day.

Here is a little more info about these tiny, efficient hunters in Vermont
Ermine in Vermont
Have you ever seen an ermine ?
Has one ever gotten your chickens ?
~
Posted by ~ Janis