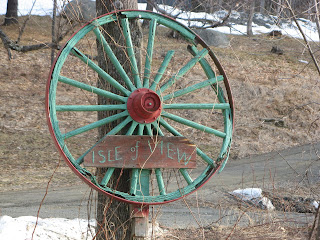 The day started with a bang~! Two loose dogs ended up in my yard in the pouring rain, disrupting the relative quiet of the house as my canine alarm system ran from room to room barking "INTRUDERS!" The 2 dogs crossed a major highway to get to my side of town. I ran out in my pajamas and grabbed the friendliest of the two and immediately realized both were wearing Invisible Fencing collars along with regular collars with their ID tags taped together so they wouldn't "jingle" and disturb their owners. The tape was difficult to remove on the black labs tags, but i did it enough to find a phone number. Cell phone in hand, I quickly punched the numbers in and anxiously waited for it to connect. "This number is no longer in service" is what I heard next. Great, another dog owner who doesn't update their dogs ID tag OR notice they have blown through the Invisable Fencing~! The black dog was trying to get into my house and was scratching on the walls. Did I mention it was also pouring rain out and both dogs were covered in mud ? And now, so was I after wrestling with duct tape, tags and collars. I was able to lure the skittish yellow female over to me and took her regular collar off so I could cut the tape off the tags and read them without freaking her out. Her tags were different. An old license with the town clerks phone number was on it, AMEN~! I called the clerk and told her the story and gave her the old license number, hoping they had an updated phone number listed on a possible newer license. Not. I ran upstairs to get some clothes on and my boots and ran out of the house 2 minutes later but both dogs had dissapeared. Into my truck I jumped and drove up my road looking in all directions. I didn't see dog tracks in the mud, so I feared they had crossed the highway again. The mud was hard to navigate. Now I know what they do with tires and wheels that fall off when they get stuck in the mud around here.. Use them as road signs. I turned around and headed for the highway just as both dogs ran in front of a tractor trailer hauling fuel. The yellow dog barely made it across and into a field. I hit the pedal and sped towards the nearest road parallel to where I estimated they would come out.

I shut my truck off and started running to where I thought they should appear, calling their names ( Boo-Boo & Tanner ) until both appeared. I got the black Boo-Boo into my truck as The very skittish Tanner circled and recircled my truck not wanting to get near me. i crouched down and snagged her as she came around the front of my truck and directed her to the back and boosted her into the back of the truck bed ( it has a cap on it ). I shut the big window and headed up to where I thought their home was. Two miles of road and 3 feet of mud, puddles and sink holes greeted me as I drove up a rural mountain road, wondering if I would be able to get out.

The driveway to their home was steep and about 1/4 of a mile. I walked to the front door with Tanners collar in my hand. I knocked. Nothing. I wondered if I was at the right place or if I was going to end up with these 2 mud encrusted guests for the day. I peeked in the side window and to my delight I saw two extra large round fluffy dog beds on the immaculate white floor. I knocked again. In another 30 seconds the door opened and there was a bloodshot, boxer short wearing, red faced 40 ish male who couldn't even talk. St Pattys Day must of been his own national holiday. I asked him if he was missing 2 dogs, he nodded yes. I told him to update the phone numbers on the ID tags and he grunted. I went back to the truck, opened the back window, dropped the tailgate and escorted the 2 mud mavins out. They were in so much trauma from being jiggled around in the back of my truck with all my gear plus firewood, buckets of sand and other winter survival stuff that they sped to the front door. The trip home was hazardous. The rain was relentless. As I rounded the last curve, the sun came out. Three hours had passed from the moment I saw the dogs til now. I immediately thought....... Lets go find some trout.
So I did. 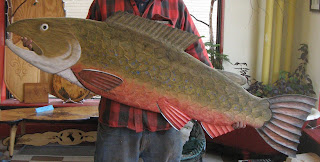