The rain arrived quietly at 1 am this morning.

At 9 am it came down harder.

I went down to the herd just as the wind started.  It was just a hard breeze. Not a damaging wind--yet...

The herd are now on the highest and driest part of the farm.  Lots of grass to eat and some protection from the wind.

The first thing I saw as I drove up to them was that Guy,Y-1, was on the wrong side of the fence. 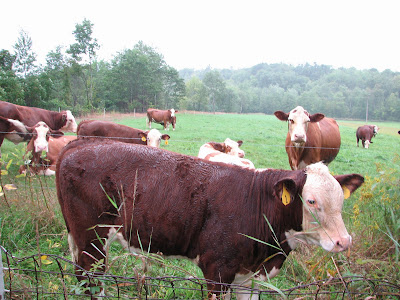 Don't know how he got out and I wasn't going to dismantle the fence to get him back in, so there he stays till he figures out how to go back to his mom.  He has lots to eat on "his side' of the fence. 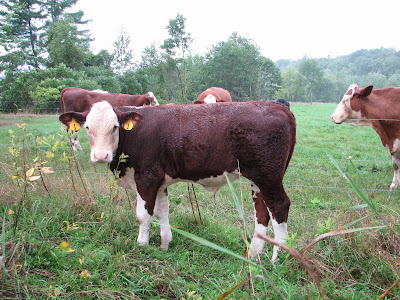 The herd was calm in the rain.
But they were defiinately wanting some treats. 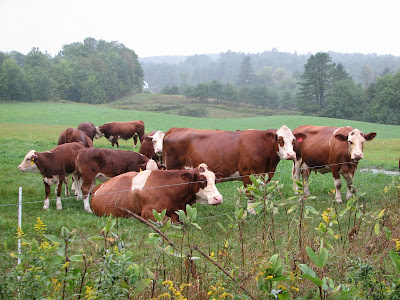 So, because there was a Hurricane coming, and because I had a 12 year old guest who had never fed cows before and because I just happened to have 2 full boxes of cinnamon covered nabisco graham crackers--the cows had an Irene feast.
My camera got soaked as we opened and fed 6 packages of snacks. 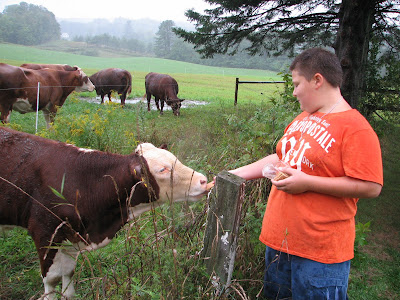 As we were feeding the cow, the wind started getting stronger and the rain came down harder. 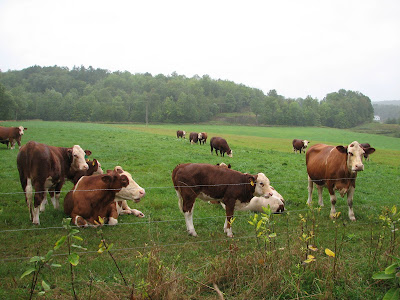 I will go back later to check on them again. 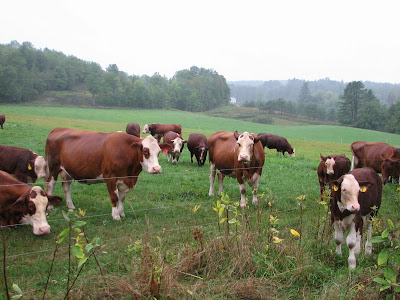 Parts of Vermont are flooding, especially in the southern part of the state.  8 emergency shelters have opened and some evacuations are taking place.
Many roads are already closed because of flooding and Irene isn't even here yet.
The electricity has already gone out a few times this morning....
Hope you and your animals are high and dry.
Posted by ~ Janis