Sometimes I think I am in Scotland while driving the back roads of my favorite towns and villages here in Vermont.  Not only does the terrain look like Scotland, but the livestock in my immediate area all originated from that bonny little country too.

One neighbor has an enormous herd of Sottish Highland cattle and there are many other smaller herds all along the countryside.    Herefords also dot the countryside as far as you can see too.

This area was settled by villages of people from Scotland. Entire villages got on a boat and came here to Vermont to settle the countryside and gain employment as legendary stone cutters, woolen mill workers and dairy farmers. The last names of many people who live here reflect their Scottish ancestry.

My great grand parents came from Scotland and farmed in Canada before moving down to New England to work in the Woolen Mills along the Merrimack River, over a century ago.
And Ironically, I presently live on a Scottish farm property here in Northern Vermont. This farm was famous in the 1920's-1990's for their Ayshire cows and their Ayrshire milk. When the farmer died, the herd was sold. The land was sold to another farm and the barn was taken down piece by piece, moved and rebuilt in another state as a different kind of barn. Sadly, there are not many Ayrshires around anymore.  Its the big black and white Holsteins that dominate the landscape as well as the paintings of local artists.   I tried valiantly to get Woody Jackson to paint red and white cows like Ayrshires and Simmentals every time I would run into him, to no avail.

Anyhow, during my drive to the recycling station in town I drove by the same empty field I usually drive by several times a week, and low and behold there were red and white cows at the fence line!!!!!!
Yes, I did drive off the road.  Yes, I did back up.  Yes, I got out and greeted every one of them and they in turn posed for my camera. 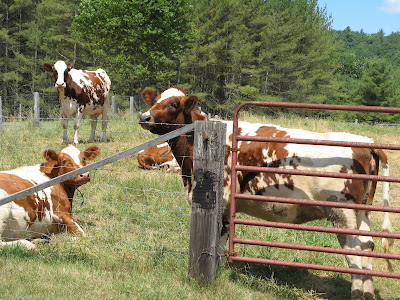 Evidently a local farmer is "summering" his heifers and dry cows at this location.

Ayrshires are making a quiet comeback up here in the Scottish meadows of Vermont. 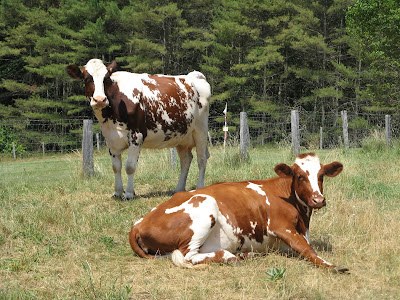 Not only are they different, beautiful and calm but they are so gentle and continually asked for their heads to be rubbed and their chins to be scratched. 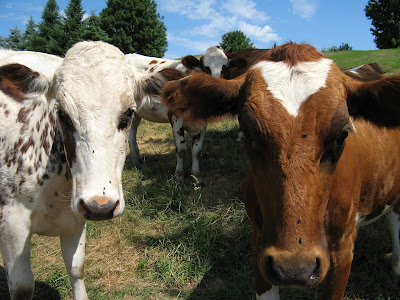 This group had all the different patterns and colors of the breed. 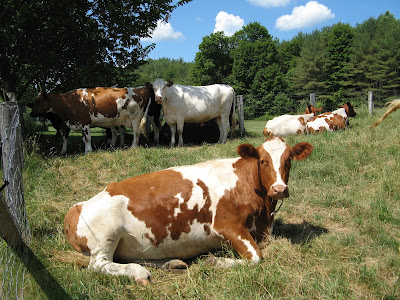 There was a bit of gossip going on with these 2 gals. 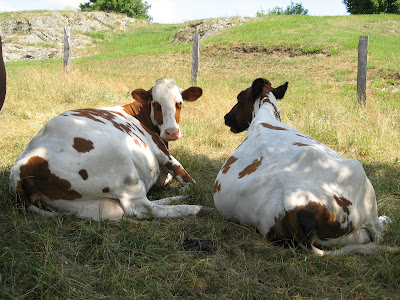 If I didn't know better, I would say this was their "have you got any treats" look. 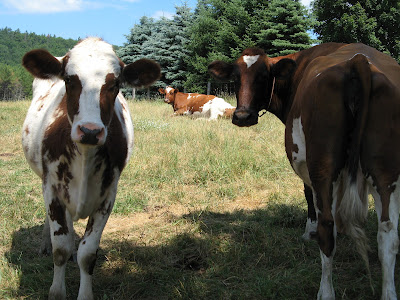 The skyies were blue, the trees are green and the cows are red and white.  It doesn't get much better than this. 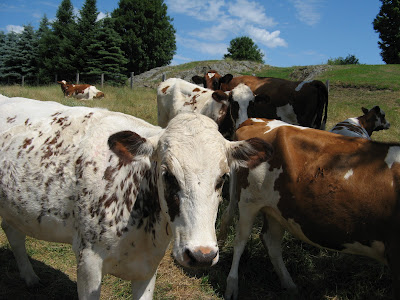 When I started to sing, they were all ears. 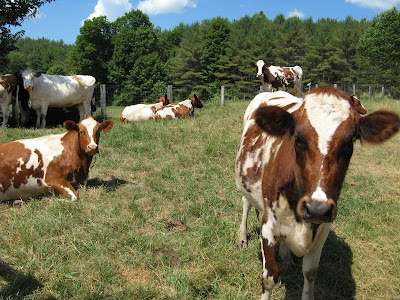 If I was an artist, I would paint this cow. 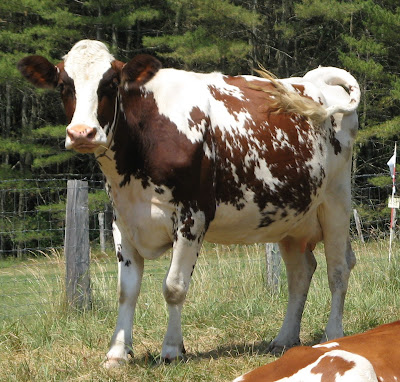 All were curious and polite.  Each coming up to me to introduce themselves. 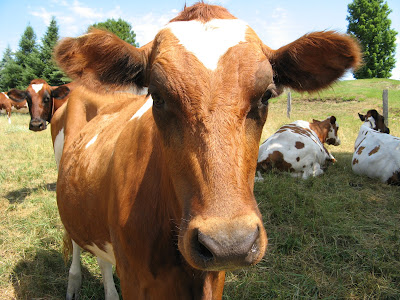 By the time I finished chatting with the girls,  I could see that I had exhausted them and they were ready for a nap. 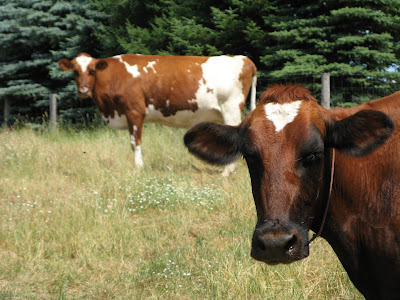 I am so happy to have discovered  AyrshireVille !    Its just a wee bend in the road between 2 small villages.

Now that I have done show and tell,  What Scottish livestock have you got in your area?
What kind would you like to have ?
~
Posted by ~ Janis