Seeking a Mate For Life

Do you believe in serendipity?

Today at the local library I was introduced, by my librarian, to a  9 year old girl who was talking about ducks. She had come to the library with her aunt for story time and crafts.

As we chatted she told me about her many breeds of ducks at her house including 2 ducks that she didn't know what sex they were and could not remember the breed they were.

As she described them I started to get a silly feeling in my stomach.

As soon as I told her the breed of MY ducks she got all excited and said "that's the kind mine are too!!"

Ironically, she and her mom have been confused about what sex they are (sound familiar?) and have been desperately trying to figure it out.  That's why they would not name them until they knew for certain the gender of each.

Even more ironic, her ducks were hatched the same week as mine from the same breeder!

I kept looking at my librarian as she had heard all my stories about my own confusion with my ducks about their sex and about how I was going to find a female or two to perpetuate this rare breed.  My librarian kept smiling and shaking her head, acknowledging the disbelief that now there were two 'duckheads" in the same room.  The parallels in our lives, with ducks, were unbelievable.  This vibrant young girl and I talked about our favorite fowl with glee in our voices and joy in our hearts.   All the other "bookheads" in the library were listening to our very animated conversation.

I showed my new little friend photos of Silver Appleyard ducks on the Internet and had her pick out the ones that most resembled her own ducks.  Using those photos she showed me that her ducks did NOT have curled tail feathers OR a green head, but were dark bodied, not all silver.  My stomach started doing happy flip flops.

In 15 minutes and 10 questions later, it was determined that her 2 ducks were most likely females.

I gave her my business card and wrote a note on the back to her mother, it said;
"I have 2 male Silver Appleyard ducks.  You have 2 females. We should talk. "

I came home with a big smile on my face.

The "Boys' were very busy in the garden eating snails and bugs but came out to greet me.  I told them the news about the possibility of having September brides.

Have you ever seen a duck smile? 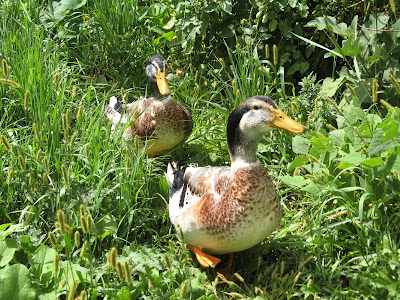 I don't know what will happen next with this particular duck match attempt, but another thing that came out of todays wonderful conversation was that the librarian admitted that she wants a few Silver Appleyard ducklings.       That is a great compliment.  She has heard me rave about my 2 ducks, she has seen them on numerous occasions and now she has met a 9 year old girl who is as crazy about her Appleyards as I am.  Its contagious.  Appleyard Duck Fever has hit the village!

Perpetuating a rare breed takes lots of dedicated individuals, some unusual circumstances plus some blind luck.  Hopefully the luck will come into play to get a female Appleyard here before the snow starts drifting in.  Otherwise the boys will remain frustrated hormone machines and the chickens will have to continue to outrun them.

Have you ever had a difficult time trying to find a mate for one of your animals?
~
Posted by ~ Janis

Email ThisBlogThis!Share to TwitterShare to FacebookShare to Pinterest
Labels: a girl and her ducks, duck match.com, finding a mate, library luck