Early this morning we had our first little dusting of snow. 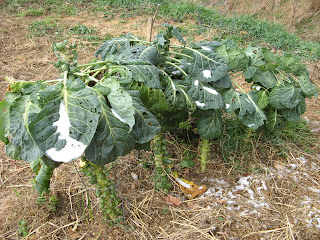 It was just enough to confuse the ducks and bother 2 of the pullets. It was the first time they had seen snow.

Marilyn ran to the stairs and stayed on the porch and didn't want to get down onto the snow on the grass. 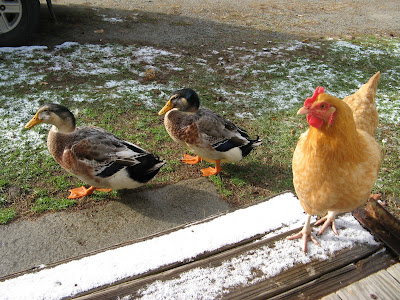 Adele took 2 steps out of the coop and jumped up on the outside nest box roof and would not come down til the snow had melted 2 hours later. 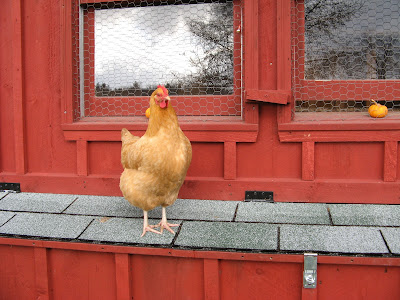 This morning I realized that since putting the clocks back one hour on Saturday, it has been getting dark here at 3:30pm.

Which means the coyotes and other night predators have been coming around earlier.

I usually get home from work late and its pitch dark and the flock is in the coop but the doors are open.

So today I rearranged the chicken area so that they are somewhat protected before I get home in the evenings.

As soon as I could find someone to hep me, I drove the huge chicken Winnebago to the other side of the coop and set up some portable panels. 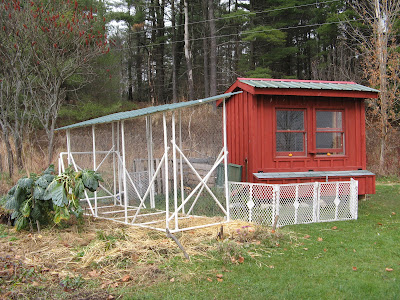 I was able to corral the entire back of the coop, including the treasured compost pile that the ducks love to spend their time at. 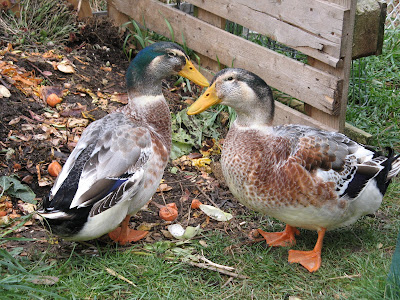 Will see how this works out for the flock, me and the plow man who has to push tons of snow out of the driveway and usually onto the garden.

If the winter is as bad as 2010 I may have to rearrange a few things yet again.

Here is hoping for less snow than 2010, but more than 2011 had, so we avoid another drought next summer.

Anybody have any predictions for snow this winter?? 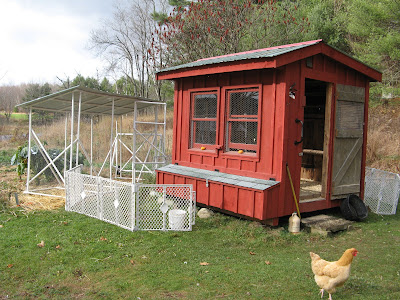 The flock watched me moving things around and as soon as I put some straw in the Winnebago, the flock came to scratch around and see if they could find the corn treats I put in there as well.
I hope they do not find all the garlic I planted in the first row..... 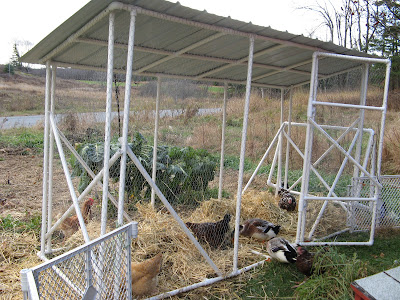 They are all use to walking in and out of this chicken tractor as it has been on the side of the house since June.   I always give them the best treats when they need to spend some time in it.  Mostly the ducks have been in it (we kindly refer to it as "duck jail.") whenever it rains to prevent them from swimming in the puddles in the road.
The roof keeps out the snow and rain, especially good for those 2 blonde pullets of mine who hate to get their feet wet.
So as long as the flock is content with this setup, all is well for now. 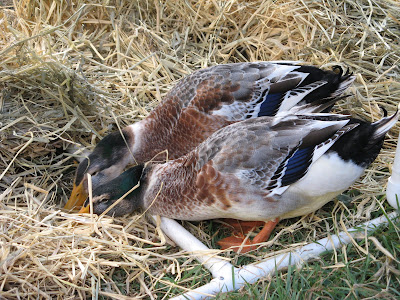 Have you had to rearrange housing for your flock for winter?

(cows are soooo much easier!)
~
Posted by ~ Janis