Whats the best present you can give an Irish Virgo?  One who celebrates Saint Patrick's Day all month!

These were harvested on my birthday last September by my favorite farmers and their recently purchased 100 year old vintage Maine potato picker. (considered a newer piece of equipment by Vermont standards..) 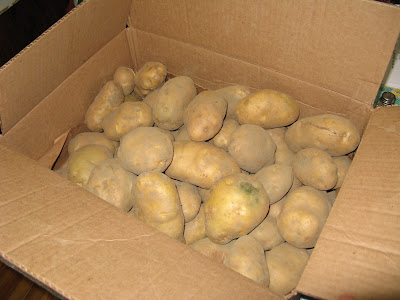 We will be making Colcannon by the bucket every day during my favorite month of the year!

Don't know what Colcannon is ?

You are really missing out!!!

Please try making it to celebrate spring!  Its so simple, even I can do it!


Colcannon is a favorite Irish recipe and a particular St Patrick's Day favorite. As you can see from this Colcannon recipe, it is quick, easy and simple to make.

Colcannon was traditionally used for predicting marriage on Halloween. Charms were hidden in the Colcannon and any unmarried girl who found one would place socks with spoonfuls of Colcannon and the charms on their front door handle. The first man to enter the house was their intended.

We make ours with turnip and carrots in the winter and parsnips in the spring (right out of my Irish garden).
When my kale comes up in May, we will be using that as well.  Sometimes I sprinkle some cheddar cheese or sour cream in too. Best to use local or Irish Butter. I also use raw milk from the local Jersey herd too.  Big difference in taste when its all fresh and local!

Some families like to bake their Colcannon.   So many ways to make the same delicious dish.

There are lots of recipes for Colcannon online, but here are a few of the more popular ones:


"While this recipe is good, with an Irish family, we ALWAYS have to have Corned Beeef and Cabbage along with true Irish colcannon which is potatoes, onions and parsnips boiled together (and occasionally carrots) then mashed together with butter.....good anytime."

"A tasty cabbage and potato colcannon is enriched with sour cream and butter, then baked until hot and topped with melted Cheddar cheese. Make it as a side or a meal."
Ingredients:
Directions:
Here is another recipe on a bag of potatoes 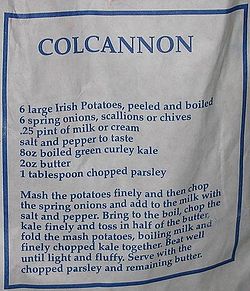 The song "Colcannon", also called "The Skillet Pot", is a traditional Irish song that has been recorded by many artists, including Mary Black.   It begins:


"Did you ever eat Colcannon, made from lovely pickled cream?
With the greens and scallions mingled like a picture in a dream.
Did you ever make a hole on top to hold the melting flake
Of the creamy, flavoured butter that your mother used to make?"


"Yes you did, so you did, so did he and so did I.
And the more I think about it sure the nearer I'm to cry.
Oh, wasn't it the happy days when troubles we had not,
And our mothers made Colcannon in the little skillet pot."


Now you all know more about Colcannon than you ever thought possible.