My co-workers are fun and always do things in a big way so it was no surprise that when I brought in my heavy bag of various egg to show them, they were eager to make a big lunch to share with the entire office.

Here are the eggs.

Largest green one is an Emu egg, largest white egg is a Buff Goose egg, next white egg is a Silver Appleyard Duck egg and the small brownish egg is from my hen, Meverette, a hard working red sex link. 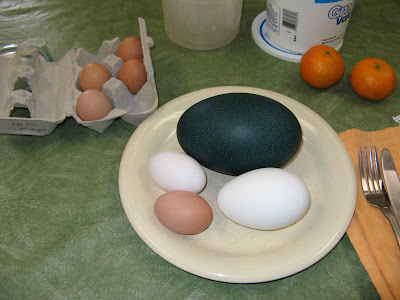 The orange eggs are from some Tango Maran hens. (just kidding..) 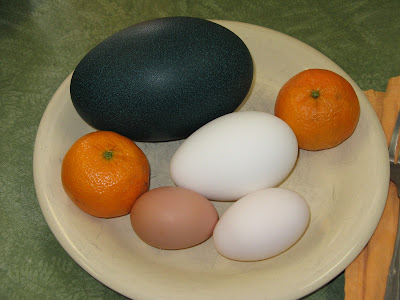 Using an electric skillet, Karin fried up some chopped onions in some delicious Kate's Butter (from Maine).
Cream, Vermont Cheddar Cheeses and salt and pepper would be added once we got the egg in the pan and mixed it all up. 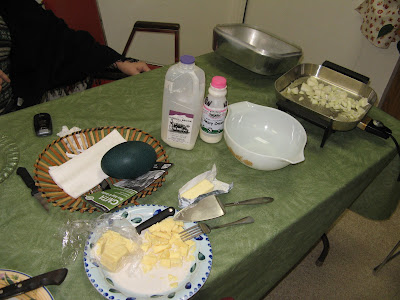 We had a heck of a time breaking the shell on the emu egg.
The first time we tried to break it open it didn't budge at all and we thought the bowl was going to break.

Another staff person went and procured a hammer as a backup system just in case.

The 2nd time the egg was wacked on the dish it broke a little and then Karin pulled it apart.

The enormous egg yolk poured forth to the gasps of everyone in the lunchroom. 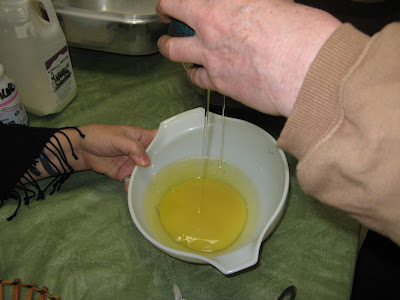 It really was an amazing sight. 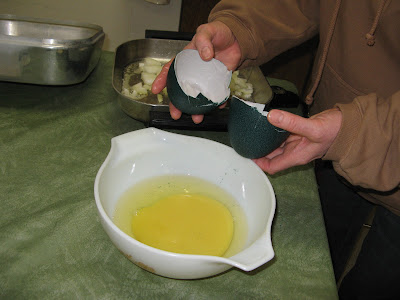 The egg was dropped into the skillet and all the other ingredients were put in and Chef Karin whipped them all together for a few minutes until the scrambled egg was ready and the cheese properly melted.

At the same time, 12 grain bread was being toasted.

The aromas of the good food were intoxicating.

There was enough in the skillet to feed 10 people or 4 very hungry adults.

It was a real protein rush for me and I finally began to warm up from the -20 below outside temps. 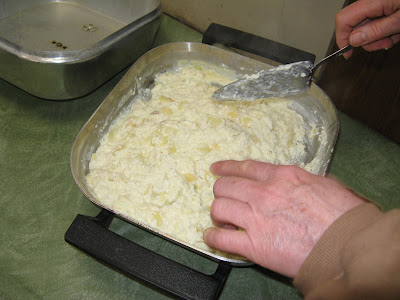 Needles to say, there was not a morsel left over or a hungry person left standing..

Judging from the excitement of the diners here, Food Adventures will continue in the future.

Any suggestions for the next unusual lunch ?

Note:  The emu egg has its own unique taste.  All the eggs had a slightly different flavor.  All delicious and all would be great for baking too.
~
Posted by ~ Janis