New Faces in the Coop

On September 7th my alpha hen got snatched, probably by a fox or weasel.
"Zora"was the talkative hen, always making noise and following me around to see what I was doing. She was vocal, friendly, productive and a good grazer. She loved spaghetti.

Since that particular day, of the kidnapping and murder of their coop mate, the entire flock stopped laying.  And a few short weeks later they all went into a massive moult.  The coop and yard looked like there had been a huge pillow fight.

Not having eggs was bad enough and now I had naked hens running around with cold weather approaching quickly. I considered getting them fleece sweaters....

So I did what any coopster would do:  I searched for appropriate, friendly, feathered pullets to join my odd flock. Its kind of late in the year to find available pullets.

But I got lucky.

It only took a few days but I located a woman one town over who had recently lost her job and had to radically downsize her flock of 90 pullets, turkeys and ducks. Her little rural farm was way out in the woods with a small crystal clear river running behind it and a 10 x 12 coop with a lean to.  She had just purchased this place earlier in the spring and was now really having a hard time making ends meet with the recent loss of her job.    From her description, she had a nice assortment of laying pullets, meat birds, turkey poults and ducks. 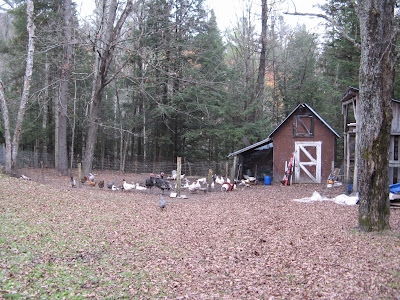 After our initial phone conversation, I went and saw her flock and how she treated them and knew that they would fit in well with my group here. Her flock free ranged and also pulled crayfish out of the river bank that was behind her house.  Her pullets came when she called them and they were all very calm around me. Just like mine.
I was interested in mostly the Barred Plymouth Rocks, since I did not get the ones that I ordered in March from my local grain store. Only 20 of those chicks came in May 7th, and someone had taken all 20.

Ironically, THESE pullets were those chicks!  Yahoo!

I now had a second chance to get a few of the original group that I had initially ordered, and I was thrilled.

Better yet, we bartered on the price and did a great exchange.  I traded her some cash plus venison and lamb that I had just picked up that morning plus pumpkin soup made from a delicious Long Island Cheese Pumpkin, for 4 pullets.  We both got a great deal: She needed food and I needed pullets.

Now I had to pick out the ones that would keep the rest of my flock warm at night and hopefully start laying eggs.

There were groups of pullets all over her yard. So many to choose from.
Different breeds, different colors. 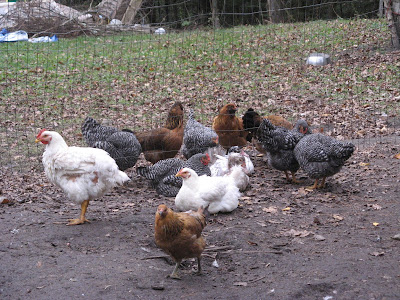 The adult turkeys came over to check me out.

There were 20 poults running around too.     I was tempted.....  but maintained my self control. 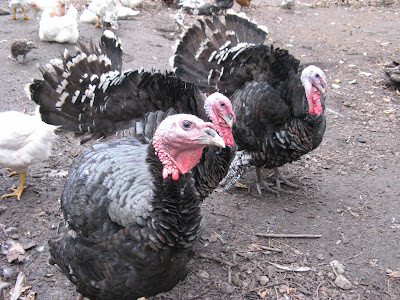 Amber called her pullets over and scooped up a very friendly barred rock.  I could tell that this was really tearing her up to part with her flock friends. I swear I could hear her heart crack.
Having recently transferred my entire cattle herd to a much younger farmer with healthy knees, I knew personally the pain she was feeling.
I assured her she could come visit her girls whenever she wanted and invited her to come to the next poultry club meeting.   I thanked her profusely for raising such gentle birds and told her that her present situation was just temporary and to stay positive. 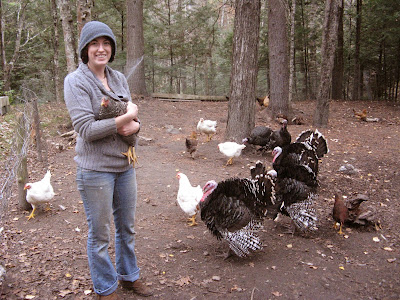 Then, to contain my own tears, I went back to selecting hens based on their friendliness.
That selection strategy did not work, as they were all calm and gentle.

So then I just started scooping up the ones that were nearest to me.

Only one of the barred rocks had started laying, but it was near impossible to differentiate which one it was. 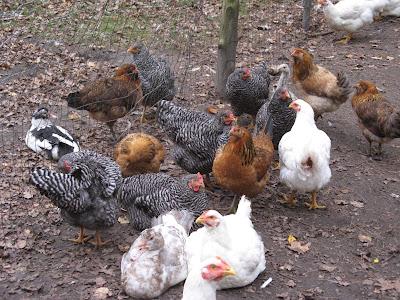 Eventually I had 4 nice pullets in my transport carrier.
Two of the birds were larger than the other two.

I had a little room for a small bird in the carrier, and those blonde americana olive egg layers had caught my eye.
I dared not consider it, but Amber encouraged me to. 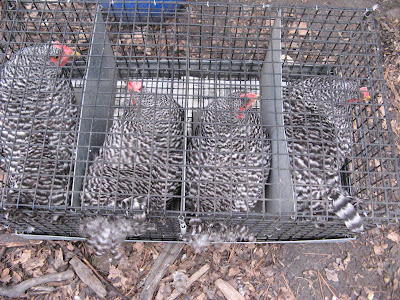 The sun was setting as I drove home the short 8 miles from Amber's coop.

I kept the birds in my vehicle until it was dark and all my hens had roosted for the night.

Quietly and quickly, in the dark, I placed each of the new pullets on a perch in my coop.

This technique eliminates fighting between the old birds and the new birds.
The theory being that the old hens wake up and see birds already perched in the coop and accept them quickly, thinking they have always been there.  Obviously chickens have no short term memory.

Anyhow, the next morning I went and opened the coop door and let the flock out into the fenced in garden area where I had planned to co mingle the flock for at least 5 days to give the new birds time to learn where they live.

My old flock was outside in seconds, but the new birds stayed on their perch with a somewhat confused look on their faces.  (We're not in Kansas anymore!!)  They realized they were in a new place and very apprehensive about jumping off the perch and going outside. 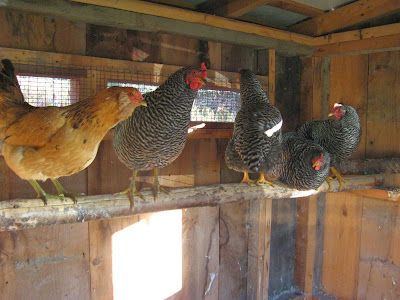 So the new 5 stayed inside all day, looking out the windows and chatting with each other.

I hand fed them and took the opportunity to take photos of them and name them. 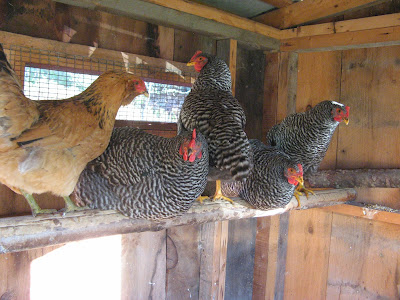 This beautiful Americana easter egger I named Amber in honor of the kind woman who raised this nice group of pullets. 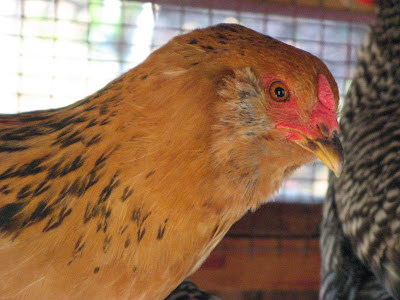 This particular barred rock pullet was the chatty one of the group and seemed to have an old soul.
For some unexplained reason the name Mrs. Howell popped into my head and stuck there. 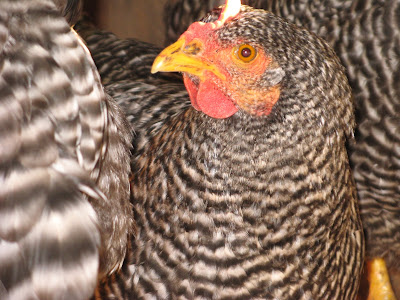 My friend and good Samaritan, Elenore Longfellow, had just died a few days previously so I dubbed this pullet with the honor of her name. 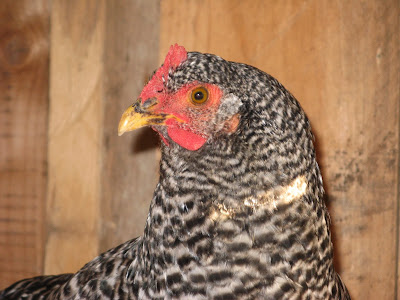 Thats as far as I got on the names.

I checked on this calm group every few hours and none of them had moved off the perch. 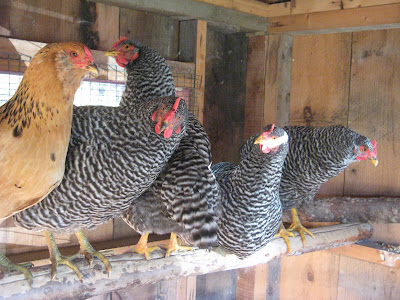 But, by mid afternoon they had found the floor, the food and the water but had not gone outside yet.

They stayed in the rest of the day and were the first to perch when the sun went down.

There were no fights with the old hens and everyone was very pleasant to each other.
I counted this as a great success, so different from what happened last year when I brought in 3 pullets and there was fighting and bullying of  ONE of those pullets. 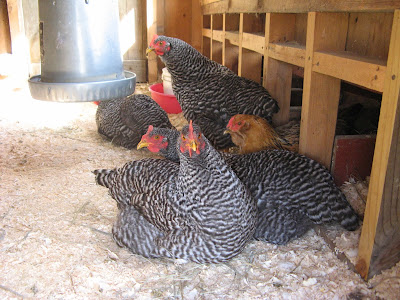 The next day the New 5 went outside and started grazing and scavenging like crazy in my semi closed garden. From that moment until several days ago when we got snow, they never ate at the pellet feeder.  They scavenged far and wide for all their own meals.  Impressive! 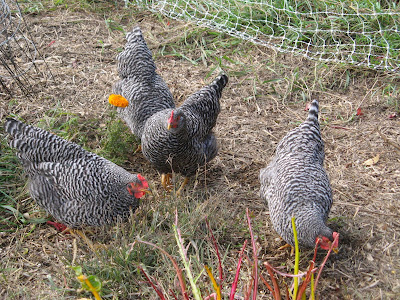 They still stuck together like this for the next 4 days. 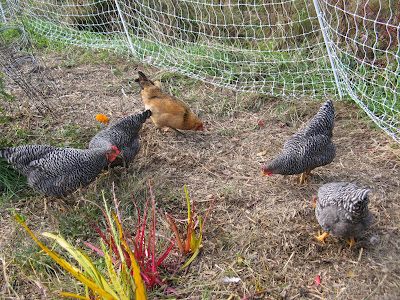 On day 5, I let the entire flock out of the garden and the New 5 hung out under the rose bush by the driveway most of the day as they observed the surrounding fields, sky and the road.  They foraged over the front yard and around the immediate area, but didn't dare go further....yet.

They freaked out a bit everytime a vehicle went by on the road. They had no road or auto experience since they were raised deep in the woods away from any roads. The 5 would run back to the safety of the rose bush to recover from "auto trauma." 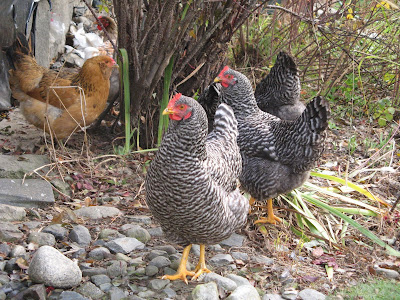 They are such a calm bunch.  They soon just laid down like the rest of the flock. 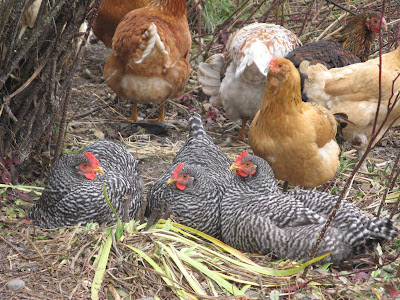 I cleaned out the coop again from all the moulting feathers and the entire flock came and looked for treats and anything else that might prove edible in the shavings. 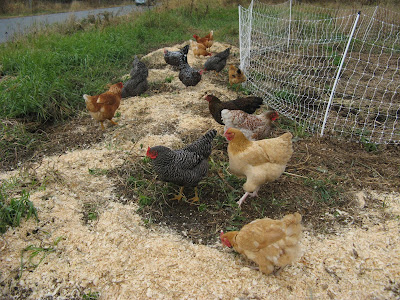 I had a friend come and put up an additional nest box incase these pullets preferred to be up off the ground. There are 7 nest boxes at ground level, but I had a feeling that perhaps having a higher option might help. 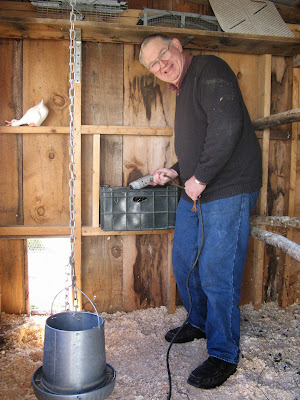 Two days later I had 4 eggs, so the wall nest box was the correct decision!

I called Amber to tell her that her girls were laying and they all seemed comfortable and content.  She was so relieved to hear the news.  She told me that most of the other birds had been sold but there was ONE MORE barred rock pullet still there........  I had to think about that.... Did I need one more ?

We had a great chat about all the antics of her pullets and how different they are from my hens.  Her girls are so much more aggressive in searching out their own food.   And she told me why.
They had to. She had no money to purchase pellets since she lost her job this summer, so that's how they learned to catch crawfish and everything else.  Nothing was off limits. 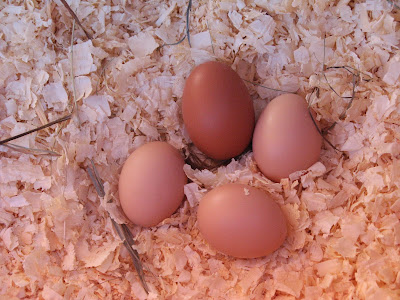 She may not have any auto experience, but she sure was always eager to jump into my vehicle and read the papers.
She also ate all the crumbs from the many pumpkin muffins I have been enjoying lately. 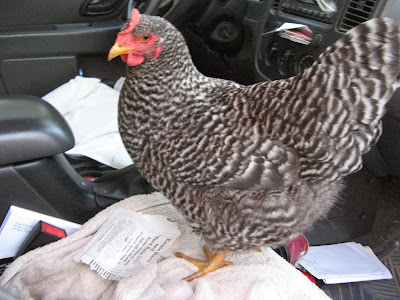 She also was also obsessed with the back of my truck.
I have a tendency to leave it open and I soon found her snuggled in amongst my sweatshirt and muck boots. 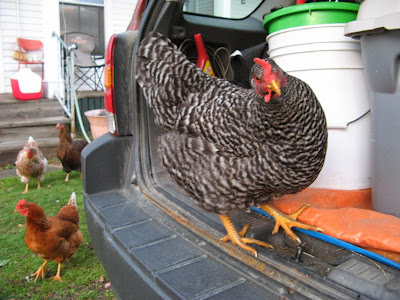 I was impressed that none of the flock messed with some kale I had transplanted (the next day it was a different outcome...).  The new birds and the old birds got along great. Soon it was evident that it was the New 5 that were leading the entire flock on grazing adventures all over the woods and fields. My flock had not ventured that far since the hormonal male ducks were here in the spring. 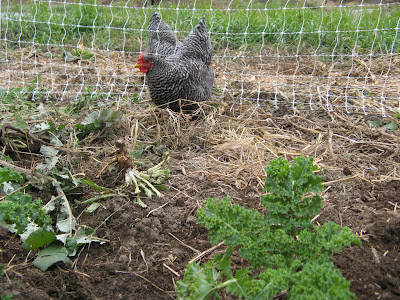 I really enjoy this new group of pullets. They are scavenging maniacs. For 3 weeks they never ate a single pellet of food as they preferred to stay out one hour later than the rest of the flock so they could continue to scratch for all their meals.  They even dug up a few potatoes I missed!
Each day they grazed further away as they became more comfortable with their surroundings.    Better yet was the warmth that they provided to my old naked moulting hens at night.  I always count heads just before I close the coop door and every night my naked hens were snuggled with the heavily feathered barred rock pullets.  Wonderful.

I am now, again, able to give eggs to friends and neighbors so they can do holiday baking for the church fundraiser and other sweet treats.  Such a relief to be able to do this again. Being eggless makes me feel like a failure.

Thank you Amber for restoring my self image and raising such a great group of SMART, hard working pullets.

Hope to see you at the next meeting of area Flocksters! 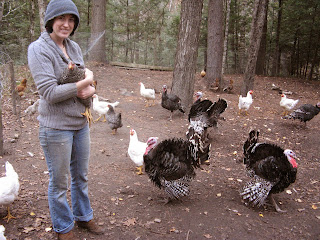 So now that I have told you my way of sneaking new birds into the coop at night, how do YOU incorporate the new with the old ?
Posted by ~ Janis