Top of the Day to you all!
Today at the local Farmers Market there was a class on how to grow potatoes.
After my career ending potatoe growing disaster of last summer I thought it a good idea to take a formal class from a sucessful potatoe farmer.
Well worth the cost of attending! (free) 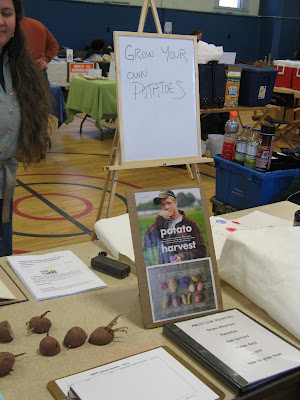 I quickly learned the "few" things that I had done wrong that added to my miserable failure. 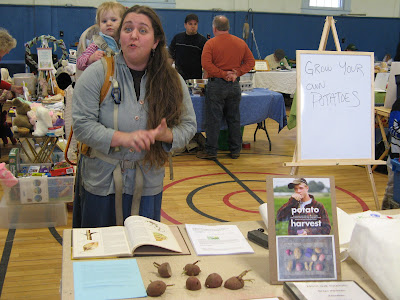 Here is the almost complete list of my mistakes:

1. Buy certified potatoes (blight resistant)      I didn't.
2. Buy early and buy many.  I bought very late and bought the "left overs."
3.Make sure the spuds have many eyes, at least 4 per potatoe.    Mine had maybe one each.
4.Cut the spuds in half.  I had cut them in 1/4.
5. Let the cut potatoes harden off for 4 days in a dark cool place.      I didn't know about this.
6. Plant the potatoes in a new area to reduce any problems with nitrogen issues. I didn't know that too much manure causes issues with potatoes.
7. Potatoes like slightly acid soils.   I had limed them.....
8. Don't over water.      We had more rain than Seattle last year.
9. Let the plants flower and let the flower die naturally and then 5 days later dig your potatoes.
What flower?
10.Plant marigolds next to potatoes to piss off the bugs.    I planted cosmos.
11. Pick off the orange potatoe bugs under the leaves every day.   Thats why I got chickens.
12. Plant in 5 gallon white buckets to avoid soil issues. Plant 2 spuds cut in half, at bottom of bucket and add soil as they grow.           I am now collecting buckets by the dozen. Got any? 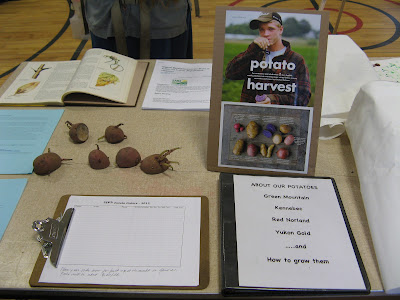 This was an excellant class and I got all the handouts and took notes.
I was so pumped up I went and had my pruners sharpened and bought freshly ground rye flour. 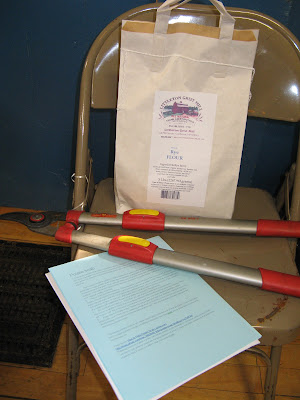 The air smelled like fresh soil so I went home and started digging up the parsnips I had planted last summer.
All the rain from yesterday softened up the ground enough in one area that I was able to extracate a few from my garden. 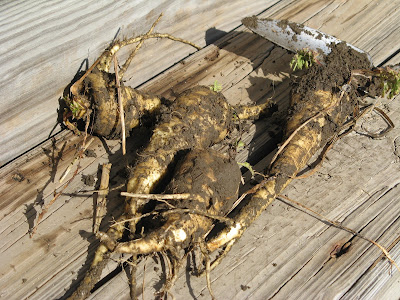 It was great to smell the earth, get dirty and see the fruits of my successful labors.  Also, I was darn lucky that there was no snow this winter so the plow guy did not destroy my parsnip patch! 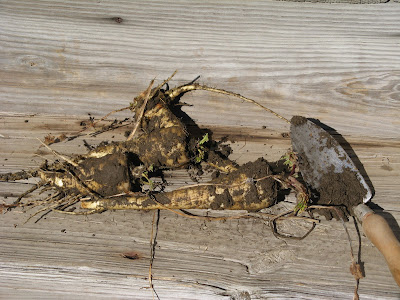 I washed them off, sliced them up and then they were carefully fried in butter and water in my best cast iron pan. 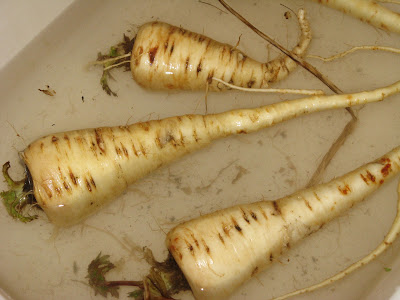 The entire kitchen smelled so sweet from just peeling them!!!

Their taste was earthy, sweet and rich with nutrients.

There is no doubt that I am much more inclined for parsnip farming than potatoe production.
I am enlarging my parsnip plantation this year.  I will be digging many more up over the next month and enjoying them in every imaginable way.
Anyone else growing parsnips?
Hope you all had a wonderful St Patty's Day!
~
Posted by ~ Janis