I learned today that a very special friend died last week and the funeral was at 1pm today.  I didn't find out the news til around 2pm.  Later information tonight said he didn't survive an operation at the local hospital.  I am stunned.  He was just here.  In this house, in this garden, in the field with my cows.  We were laughing about my garden failures last summer and the migration of snails thru my yard. 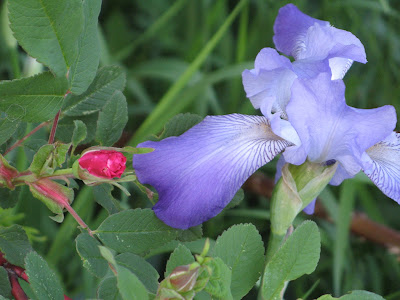 Everette was a "retired" farmer and master gardener and treated my gardening club to a grand tour last year.  It was an amazing experience. He didn't just have a "green thumb," his thumbs were emeralds.   His gardens were huge and all his adult kids had chunks of land and even more intense gardening set ups.   I learned alot from his explanations of how he starts, grows, fertilizes, saves seeds, eliminates weeds and cooks his vegetables and fruits.  Especially about the flowers and tansy he uses as natural garden pest repellents.  His fruit trees and berry bushes were healthy and full and that sight alone made me want to get some.  I later sent him a Thank you card with 3 of the last 2011 rare Dr Rowe poll beans in it.  I felt that "just incase" something happened to me last winter, then Everette was the appropriate person to trust with my last special bean seeds.  He appreciated their productivity and their rarity and he knew what to do with them to make sure they continued their legacy.
He phoned me last month and said he wanted to come visit me, meet my cows and get some more of the very rare pole beans that Dr Rowe gave me just a few weeks previously.  Everette shared with me his dedicated plans to grow the beans and send them to Seed Savers.  I was thrilled.

He brought his wife, we walked the fields, he asked lots of questions about my gentle herd.  He was impressed.  Last year he had said he was going to get a few Scottish Highland cattle to graze his field. Now he was considering Simmental.

He thanked me profusely for the seeds and tour. He also warned me NOT to plant anything until after the May full moon since there was a good chance there would be a frost.  It was hard to control myself, but I did and of course he was right.

Several days ago I heard a bunch of people at the grain store saying they were not planting anything until after June 7th, since there was again a chance of a hard frost.

I wrote a note to myself to phone Everette and ask him if he agreed with that information.

Tonight, I planted my largest heritage tomato plant, a Brandywine variety, in memory of my patient gardening friend Everette. 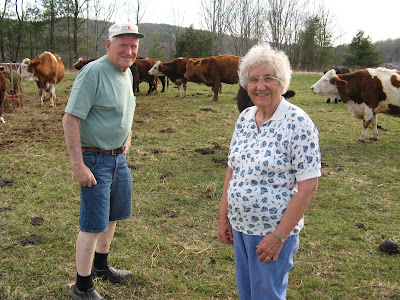 I will be dedicating my gardening season to this gentle man who inspired me to get tansy, snail killing ducks and heritage seeds, including unsual melons.