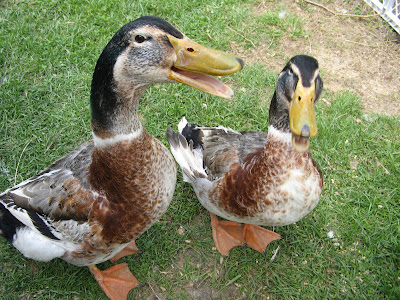 Hormones are a horrible thing.

Since March my 2 beloved male Silver Appleyard ducks have been attacking and irritating all my hens.  Their male hormones have been raging OUT OF CONTROL, as nature intended this time of year.

My 6 hens have duck wounds on their shoulders and missing numerous feathers everywhere on their bodies.

The flock has spent most of their days hiding up on the back porch, away from the mate crazed ducks.

The porch got messy, the hens egg laying abilities deteriorated and the 2 ducks turned into little monsters.

I penned the boys up in a special duck area, but they continued to escape by climbing up on top of each other to boost themselves over the fences. These ducks are too smart.

I also had to trim their wings to prevent them from using the wind to aid them in their escapes over the fences.

When the ducks did escape, the hens screamed and ran with the ducks chasing them til they caught them and then I would be running after them with a broom to keep them off the hens and then trying to herd the testosteroned twosome back to the coop to lock them up.

They didn't get to free range and forage anymore as they were obsessive about raping the hens.

My 4 female ducklings never arrived in April and there is a backlog of orders so I imagine my order will eventually get canceled.  With this in mind, I knew I had to find some adult female ducks for the boys.

I put an ad on craigslist and within an hour I had a reply from a woman who had 2 white pekin ducks that were suppose to be a male and female pair...but the male turned into a female.

So with a heavy heart I decided she could have my beloved boys.

She drove right over from New Hampshire and picked up Rudy and Agnew. 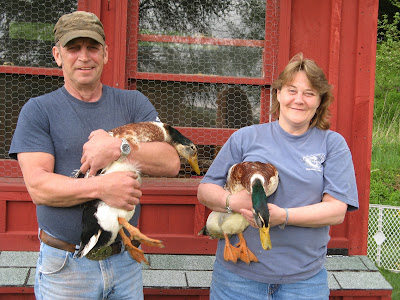 It was love at first sight. 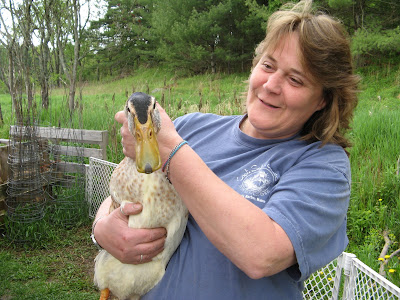 Into the duck transport cage they went. 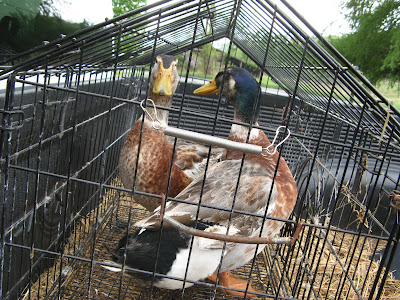 In less than an hour the boys would be married and settled. 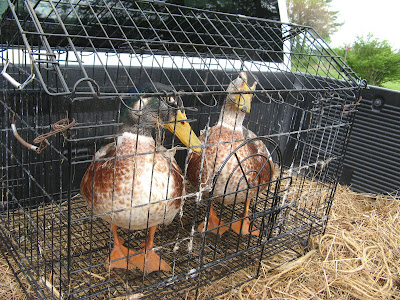 A few days after they left, I got several photos of them at their new abode.

They were swimming in their pool with their new mates and looked very content.

All is calm here, finally.
The hens are off the porch.
Egg production has increased.
Their wounds are healing.
I no longer have to gallop across the lawn, screaming, with a broom.

I miss the boys, especially when I see snails invading my garden.

But I know they are much happier where they are. *sniff*
~
Posted by ~ Janis